Lady Warriors a work in progress

After graduating four starters from last season, the Lady Warriors are trying to regain ground for this season.

Nansemond River High School girls’ basketball team graduated a significant amount of production from last season. NRHS has been a prominent girls’ basketball program the past couple of years, and this year may be a bit different.

“I would not say we are rebuilding (but) rather reconfiguring what we have this season,” Lady Warriors coach Calvin R. Mason Sr. said. “Everything right now is a work in progress, and we are taking small steps right now.”

Senior Briana Autrey returns as the premiere player for the Lady Warriors and the only starter from last year’s team. Autrey has signed to the Air Force Academy and will look to lead the Warriors past expectations. She is also among the best talents in Hampton Roads in regards to girls’ hoops. 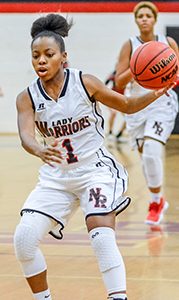 Taylor Paquette and Ashlee Robertson are also expected to add some production for the Lady Warriors.

NRHS is currently 0-2, but Mason believes his team is coming along. He knows it will take some time and will have to be optimistic about the growing pains the teams will go through this season.

“We are inexperienced and young, but we will not use that as an excuse not to try to play good basketball,” Mason said. “It is probably not going to be pretty but we are going to play hard, and that’s all I ask of them to do.”

Mason believes that the hard work the team has been putting in will eventually show in games. From the first couple of games, Mason has seen progress. He believes the biggest thing that will help a young team improve is communication.

Nansemond River will try to get its first win against Western Branch High School on the road at 7 p.m. Friday.