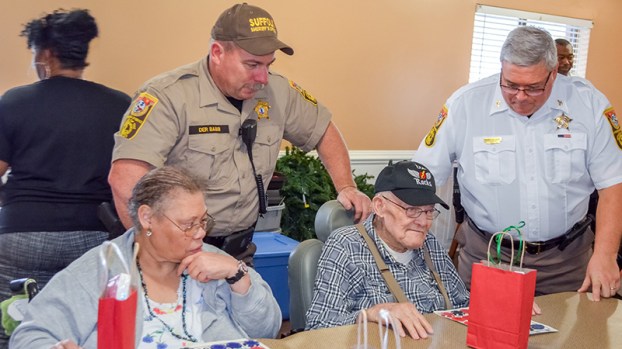 The residents at Autumn Care don’t mess around with their bingo.

The Suffolk Sheriff’s Office regularly volunteers to run the bingo game at the nursing home, and even seasoned law enforcement officers have found themselves struggling to keep up with the residents.

Deputy William Hardy couldn’t call them fast enough for competitors when he and other deputies came last year. They kept wanting to go faster and faster to fill out their bingo cards, he said.

This year, Community Engagement Coordinator Katie Jones spun the cage and called out to dozens of residents, many anxious to place their chips and fill their cards.

Resident Carrie Richardson sat beside her husband and fellow resident Bruce Richardson when she raised her hand with a wide grin on her face. She got so lucky Tuesday afternoon that she ended up running out of chips.

“I love to play bingo,” Carrie Richardson said. “I don’t win too often, but when I win, I win.”

The sheriff’s office routinely visits Autumn Care throughout the year to deliver cards, well wishes and appreciation around Christmas and other holidays, such as Mother’s Day and Easter.

“Of all the organizations that visit the facility, Suffolk Sheriff’s Office has been the most dedicated,” Autumn Care Activities Director Tameika Cross said. “They never miss a holiday.”

“Everybody had a wonderful time, and everybody was a winner,” Sheriff E.C. Harris said.

Deputy J.C. Patterson walked the halls of the building in his best Santa Claus outfit, giving season’s greetings to residents in bed. Some remember him from his previous visits, he said.

“They get smiles on their faces, and you can see them go from nothing to just smiling and waving,” Patterson said.

Some deputies said they enjoyed getting out of their usual work routines to spend time with the elderly.

“How often do you get to come and spend time with people that lived whole lives and have so much wisdom,” Deputy Eddie Harville said.

For some residents that don’t get many visitors, if at all, the regular visits help them feel cheerful around the holidays, Harris said.

“It’s important, especially this time of year, that the elderly know that there are people that think a lot of them, care about them, and will bring them holiday cheer,” Harris said.

Instead of sitting in a classroom on Tuesday, Mack Benn Jr. Elementary School fourth-grader Isaiah Mahome painted the windows of... read more