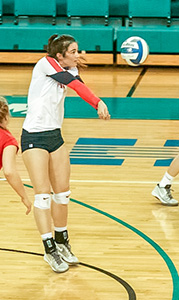 Nash finished up her senior year at Radford University as the only Radford volleyball player chosen for the team. Nash finished a strong year in which she eclipsed 1,000 digs. It was an impressive accomplishment for her, considering that she had not played in the libero position for her whole career.

Nash was also selected as the Big South Defensive Player of the Week twice this season. She was an integral part of a Radford team that finished second in the Big South and earned a berth in the NCAA Tournament.

Lady Warriors a work in progress

After graduating four starters from last season, the Lady Warriors are trying to regain ground for this season. Nansemond River... read more