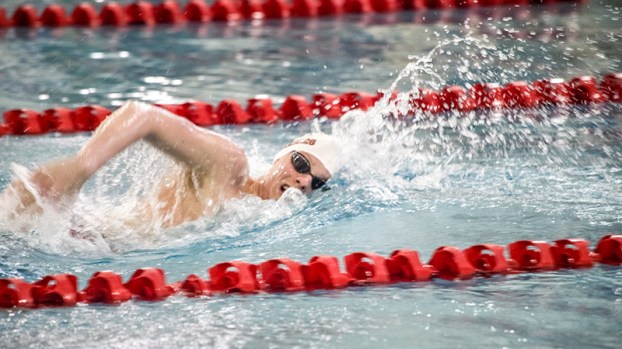 Warriors junior Allen Zachary swam a personal-best 21.03 in the 50-meter freestyle in the Junior Nationals in Knoxville, Tenn., this week. Melissa Eubanks Photo

Zachary to compete in Junior Nationals

Nansemond River High School junior swimmer Allen Zachary is already making his mark on the national stage and has several competitions to go in the Junior Nationals this weekend.

On Thursday, Zachary competed in three events and will compete in a couple more events throughout the weekend at the competition in Knoxville, Tenn. Going up against national competition is always a tough task, but Zachary was able to drop times and also finish with a personal best of 21.03 in the 50 free.

At Nansemond River, Zachary has been a promising swimmer in his past two years. In 2016, he was the regional champion in the 50 free.

He is a year-round swimmer who is coming off of a solid summer and fall. At the futures swim meet in Ohio in August, he placed fifth in the 100 fly, sixth in the 100 free and seventh in the 50 free.

After Junior Nationals, Zachary will return to a highly rated Warriors swim team, which had its highest number of wins in the school’s history last year. His sister, Kristina Zachary, also swims for Nansemond River, and the two siblings are hoping to have an even more successful season this year.