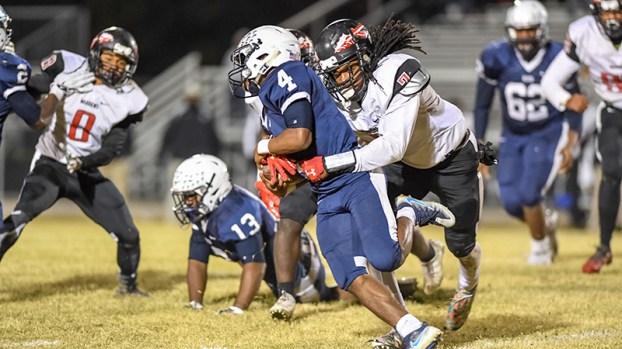 Gerard Stringer makes a tackle for the Warriors. He was voted the Region 5A Defensive Player of the Year. Sarah Murphy Photo

The Warriors placed 11 players on the Class 5 Region A all-region team, along with the Coach of the Year.

Nansemond River had a season for the ages this year. On their journey to a 5A regional championship, Nansemond River defeated Princess Anne, Indian River and Salem high schools.

On the first team offense, junior Kevin Johnson was selected as a first team running back. D.J. Jackson and Harlen St. Louis were chosen to the first team as offensive lineman and center, respectively.

Evan Lomax was chosen as the first team punter and kicker. Rashaad Williams was selected as the return specialist on the first team. All five of these players were also selected to the Southeastern District teams as well.

On defense, Nansemond River boasts the Region’s Defensive Player of the Year in Gerard Stringer. Stringer is an East Carolina University signee who will play linebacker at the next level. Along with Stringer, Joeziah Autrey and Quijoun Gordon were selected as a defensive lineman and defensive back, respectively, on the first team.

Warriors coach David Coccoli was selected the 5A Region Coach of the Year.

Nansemond River finished its season with a 9-5 record and a final four finish in the Class 5 state playoffs. Both the record and playoff finish are school bests. It is possible that Nansemond River could have a couple of representatives on the Class 5 all-state team. Five players who were selected to the all-region team will be returning for next season.