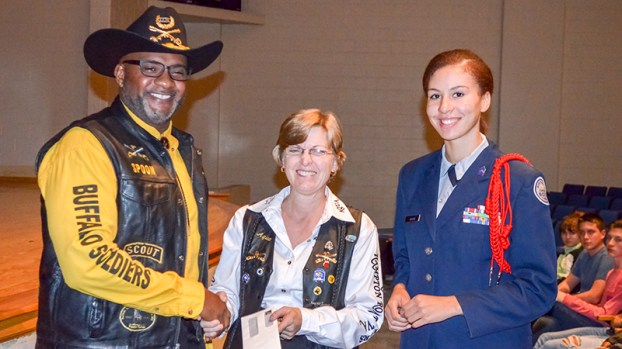 High school students raised money in honor of a dearly missed mentor and presented a check to that mentor’s cherished organization on Thursday.

“It was definitely more successful than previous runs,” Moore said. “I wish we had an even better turnout, but I think it was successful.”

The race was held in memory of Master Sgt. Selwyn Curtis, a U.S. Air Force veteran and JROTC instructor at the school who died from cancer in August 2016 at age 64.

“This particular one will be in Curtis’ name,” Witherspoon said.

In the same auditorium where her husband’s memorial service was held, Laurie Curtis spoke to the students that he loved so dearly.

“It is so awesome to know you did this,” she said to the cadets. “He would brag about you, and he expected a lot from you.”

She said that he didn’t expect his cadets just to be sharp. He wanted them to be razor sharp.

“He engaged the whole cadet corps like he was everyone’s father,” Moore said.

The instructor was also a devout man that was active in his spiritual community at Southside Vineyard Community Church in Smithfield, Laurie Curtis said.

“He just had a way of teaching his students, and being there for them as a spiritual counselor and mentor,” she said.

She said he gave 100 percent to his cadets, teaching them to embody honor, commitment and courage. He pushed them to excel in class, prepare for SATs and apply to colleges.

“He would love to know that (the check) is going towards a scholarship,” she said.