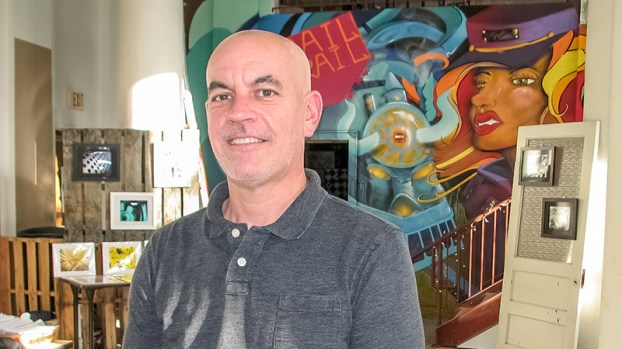 Ed Beardsley stands in OnePast7, the artists’ studios he has leased on the first floor of the Professional Building and is subleasing to about 14 artists.

Downtown arts on verge of renaissance

Painters, photographers and textile artists now have a place to do their work right in downtown Suffolk.

OnePast7 has opened on the first floor and mezzanine of the historic Professional Building at 100 N. Main St. It is only the first step in what Ed Beardsley hopes will be a renaissance of sorts for art in downtown Suffolk.

“Art in general, and artists and all that comes with them tends to breathe a bit of fresh air,” Beardsley said. “It’s just been a win-win for everybody.”

The effort started about six to eight months ago, when Beardsley was considering relocating the Plaid Turnip restaurant, which he has owned for about seven and a half years.

But the work of a consultant brought in to create a new Downtown Initiatives Plan convinced Beardsley that good things were about to happen in downtown.

“It was all very exciting,” Beardsley said. He thought, “Why don’t I do something about it?”

The goal is to promote, support and foster the arts in Suffolk, starting with downtown, Beardsley said. He has talked with merchants as well as with the arts organizations already in downtown, such as the Suffolk Art League and the Suffolk Center for Cultural Arts.

“There’s a lot of stuff here, and it kind of needs to be coalesced,” Beardsley said.

The first part of the effort is OnePast7, which is what Beardsley is calling the studio space he has leased in the Professional Building. It is so named for the clock on the corner by the building, which is stuck at 7:01.

Beardsley has about 14 artists renting space in the building on a month-to-month basis for nominal rent — about $50 to $100 a month, he said. They have 24-hour access. One of the artists lives only a couple of blocks away; others are coming from as far away as Newport News and even North Carolina, Beardsley said.

“It’s a neat group of people,” he said. “You can see a community feeling with the group.”

He plans weekly artist showcases following a grand opening in January, he said. A holiday open house is planned this Saturday.

Beardsley has also leased the spaces at 147 and 149 N. Main St., where Maya Couture on Main was formerly located. Other artists are subleasing the rear of the buildings, and the front will be turned into a permanent pop-up shop location, he said.

The next project Beardsley will tackle is getting downtown declared an arts district, he said.

Finally, Beardsley hopes to secure city code changes that will allow murals on downtown buildings. He already has about 10 property owners, representing about 20 walls, who have agreed to have murals put up once it’s in accordance with code.

He also hopes to have a public sculpture program.

“It’s a great way to spotlight the historical buildings,” Beardsley said. “It’s all going to be a slight mind shift.”

Beardsley said he looks forward to using his organizing and consensus-building skills to benefit downtown.

“If I have a strength, that’s probably what it is,” he said. “It’s exciting to see what will come out of it.”

Santa Claus and the Suffolk Sheriff’s Office delivered holiday cheer to schoolchildren on Monday after another successful toy drive. About... read more