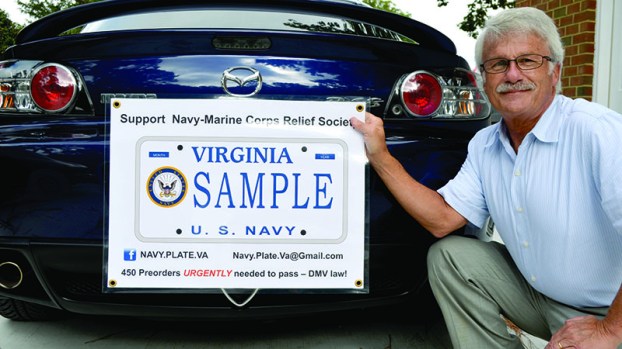 Roger Hirsh holds an image of the Navy license plate that he’s campaigning for behind his Mazda RX-8. (File Photo)

Despite setbacks, Western Branch resident and Navy veteran Roger Hirsh is still determined to help other Navy families in Virginia show pride on their cars with a specialized license plate.

Hirsh began his campaign in January after he realized there wasn’t an option for a Navy plate for a car in Virginia.  He has since worked with the Department of Motor Vehicles, the Navy Trademark Office and his state legislative sponsor, Delegate S. Chris Jones, to change that.

Hirsh needed 450 paid preorders by Dec. 8 before he could present his request to the General Assembly in January. Unfortunately, he only had 100 preorders at deadline, and will now have to wait to present his case until January 2019.

He sent letters in November to those that pre-ordered plates, explaining the unfortunate news and offering refunds. He also, however, emphasized his intentions to keep going.

“I remain committed to pursuing this effort with the adjusted target of January 2019, believing that the past year has laid a solid groundwork to see this project to a successful conclusion,” he stated in the release. “Yes, there have been a few course corrections, lots of lessons learned, and money spent, but I remain committed to the goal, despite discouraging returns to date.”

Hirsh enlisted in the Navy in 1971 and met his future wife, Chris, shortly after. Their 32-year-old son, Justin, is a network engineer at the Lockheed Martin Center for Innovation in Suffolk, and their 36-year-old daughter, Jennifer, served three years as a pharmacy officer in Great Lakes, Ill.

Hirsh has about 30 combined years of active duty as an enlisted hospital corpsman and later a pharmacist. He plans to retire from civil service this January and work on his campaign full-time.

“It’s going to be my retirement hobby,” he joked.  “Some people play golf. I guess I play license plates.”

He recently worked a table with brochures and other material during Hampton Roads Fleet Week in October, and intends to do the same at local Navy Exchange stores, air shows and other events that draw Navy men and women, he said.

“It’s about getting the word out, making sure the message is right, and just making the push,” he said.

He’s learned to make adjustments during this intense process, he said. He changed plate’s design per feedback for larger lettering, and he’s also grown accustomed to social media like Facebook.

He said that as of Monday, only one individual who pre-ordered a plate requested a refund, and he’s encouraged even more by positive feedback from others.

“I believe it needs to happen, and I think there are a lot of other people that believe the same way,” he said. “I’m convinced we’ll get there eventually.”

A retired military dog is missing from her Portsmouth home and may have been recently spotted in Suffolk. Darja, a... read more