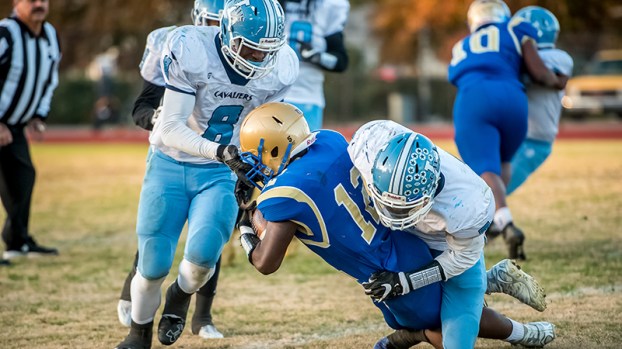 DeAndre Faulk makes a tackle during a playoff game against Phoebus High School. Faulk was selected to the Class 3 all-state team for a second straight season. Sarah Murphy Photo

The senior enjoyed a season in which he was a first team all-district and all-region selectee and now has seen his work recognized as an all-state performer as well.

“It is a great honor to be named a two-time all-state player,” he said. “It just shows the work that I put in on and off the field.”

Faulk will be placed among the most accomplished football players ever to come through Lakeland. He has been a starter on the team since he was a freshman, and over the course of his career has felt he has accomplished the things that he wanted. In 2016, he was an all-conference, all-region and all-state linebacker. He was an integral part of Lakeland’s most successful playoff run in school history last year.

“Man, it is indescribable,” Faulk said of his time at Lakeland. “To be mentioned with some of the most accomplished is just a blessing. Couldn’t have gotten any of this done without God.”

A big motivating factor for Faulk throughout his high school career was the fact that people told him he was too small to be a productive linebacker. With four years of high school football completed, Faulk believes he has “shown his haters different.”

“Overall, I felt like I had a good high school career,” he said. “I was always told I did not look like a linebacker or was too small. Now I will continue to carry that on to college.”

Faulk has significant interest from NCAA Division-I schools and even has a couple of offers on the table. He is still going through his recruiting process as he remains patient to make the best choice for him.

Faulk will step on the field for Lakeland one last time Saturday as a part of Team 757 in the I-64 Bowl at the Virginia Beach Sportsplex.