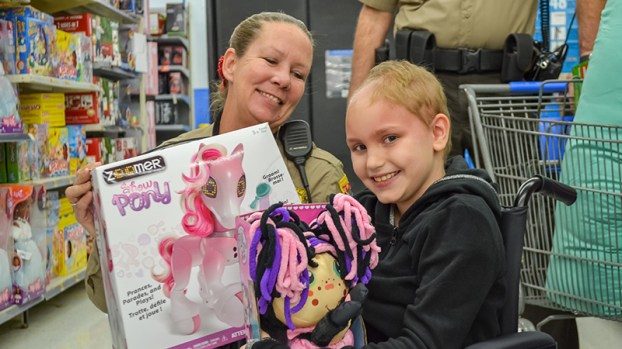 Law enforcement officers were pushing carts full of Christmas gifts through Walmart aisles as they helped children enjoy a shopping spree on Friday.

The shopping was made possible by the Fraternal Order of Police Lodge No. 41 and its annual “Cops and Kids” event. Both active and retired officers from the Suffolk Police Department, Suffolk Sheriff’s Office and elsewhere came to take kids shopping for Christmas.

Lodge President Al Bremer said 19 children participated on Friday in the North Main Street Walmart, and each child was given a budget of $100. Families are referred by Social Services and the Western Tidewater Community Services Board.

“These parents are having a hard time and need help,” Bremer said. “That’s why we’re here.”

More than six officers helped the kids make decisions and kept a running total of the purchases.

Babor said the event allows children to see a different side of law enforcement.

“The biggest impact is just showing a different aspect of police,” he said. “That it’s not just about arresting people and throwing them in jail.”

Kenya Scutchings said she was overjoyed when her Western Tidewater case manager explained the event and what it meant for her children.

“When I got called about it, I was crying,” Scutchings said. “It was really touching.”

Many of the children were more concerned about using their budgets on gifts for others, such as Robert Jacobs, 13.

Robert filled his cart with gifts for his brother Dereon, 9, his father, Michael, and his mother, Evelyn Knight. He only threw in a foldable rocking chair for himself at his mother’s insistence, he said.

“I really didn’t want to buy for myself at first, until my mom told me to,” he said.

“It’s really nice, them giving up their time to do this,” she said. “Not many people would do that.”

Sheriff’s Deputy Sandy Toby said she looks forward to the event every year.

“I don’t have kids of my own, so this is my opportunity to come out and have a great time with the community’s kids,” Toby said.

She walked with Shayanne, 8, and Steven, 11, Stillman, as their mother, Nicole Madison, pushed Shayanne in her chair.

Shayanne was diagnosed with brain cancer and has been receiving treatment at Hampton University Proton Therapy Institute, she said.

“We haven’t had time to go shopping this year, because we’ve been going to treatments every day,” she said.

While Steven was deciding on Legos, Shayanne picked out two decorated pillows, a Flip Zee Girls doll and her favorite Zoomer Show Pony.

“I’ve been wanting it since it came out,” she said about the pony. “You can feed it, brush its hair and it moves by itself.”

Carol McClelland sat in the grass in the bitter, chilly Saturday morning. In front of her was the headstone she... read more