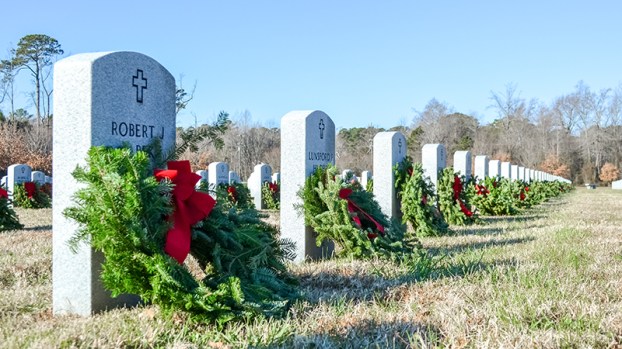 Carol McClelland sat in the grass in the bitter, chilly Saturday morning. In front of her was the headstone she adorned with one of the thousands of wreaths that were distributed from trucks parked at Albert G. Horton Jr. Memorial Veterans Cemetery.

The headstone on which she silently rested her hand read Harry R. McClelland, a retired U.S. Navy sailor and World War II veteran. He worked as a purchasing agent for 50 years, with a specialization in power plant construction, until he retired in 1991. He died on July 20, 2009, at age 82.

McClelland was joined by her daughter, Tracy Graham. Graham said her father was a kind, gentle man, in addition to being a diehard Steelers fan since his Pennsylvania childhood.

McClelland said he was a loving husband for 29 years of marriage, and a patient man with four grandchildren and one great-grandchild.

“He lived a long life, and he lived a good life,” she said. “That’s what’s important.” 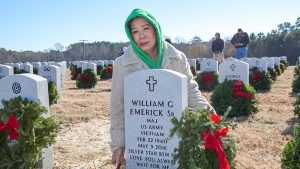 She said that time doesn’t seem to heal that empty spot in your heart when a loved one is gone.

“It heals the wound a little bit I guess, but there’s still that hurt, and you miss them,” she said.

Hundreds of widows, children, siblings, volunteers and more performed the annual wreath-laying ceremony at the cemetery.

The Horton Wreath Society has been conducting the event every year since 2008. The society works all year long to raise money to purchase a fresh evergreen wreath, embellished with a red bow, to adorn every gravesite during the Christmas season.

More than 7,200 wreaths were laid last year, and that number grew to approximately 8,300 this year. The hundreds of people that came by bus in their winter layers still managed to adorn every headstone in just about two hours.

“It’s very touching, deep in my heart, to give respect to these men and women who served for so many years in different eras and wars,” said Fred Torres, 60, retired U.S. Navy chief and Knights of Columbus member.

His friend and fellow Knights of Columbus member Ivol Sexton, 66, himself a Coast Guard veteran, said he’s impressed by the large crowds that volunteer each year.

“There’s a lot of people here that have no affiliation with the military at all, and they’re still out here to honor all these folks that are buried out here,” Sexton said.

Jaylen Spaulding, 7, and Mason Terrell, 7, were among the many Boy and Girl Scouts that took wreaths by the armsful to lay for veterans they never met.

“I like putting wreaths for people that were in wars for the United States,” Mason said.

Poquoson resident Lisa Emerick was at the cemetery for her late husband and retired U.S. Army Maj. William Emerick Sr. He was a Vietnam veteran and recipient of the Silver Star Medal.

Maximiliano Pino III, a future operations and plans officer for Naval Network Warfare Command in Suffolk, and his son, Maximiliano Pino IV, paid respects to U.S. Navy veteran Joseph Grimm and his wife, Kathleen, both buried at the cemetery.

Pino said his family bonded with the Grimms when the couple took him under their wing back in the 1990s when he was a young sailor aboard the USS Nimitz in Norfolk.

“They pretty much took me in,” he said.

The Grimms’ daughter, Jennifer Grimm, said Pino became like a brother to her over the years, and the families spent time together at Huntington Hall in Newport News.

“I learned to play spades over there with all those guys,” she laughed.

Following the wreath-laying, a ceremony was held at the committal shelter, with wreaths placed for each of the branches of the military, and for more than 93,000 servicemen whose last known status is prisoner of war or missing in action.

Rear Adm. John “Jack” Scorby spoke to the crowd about the need to remember and reflect on the fallen but also to act.

“We must act as citizens in ways that honor and remember the lives, sacrifices and the legacies of those who serve our great nation,” Scorby said.

A Civil Air Patrol Cessna 172 aircraft soared in the sky above Col. Dean Gould, Virginia Wing Commander with Civil Air Patrol, as he read a tribute for Wreaths Across America, which coordinated wreath-laying ceremonies on Saturday with Arlington National Cemetery and more than 1,200 additional locations in all 50 states, at sea and abroad.

“The freedoms we enjoy today have not come without a price,” Gould said. “Lying here before us and at cemeteries throughout this nation are men and women who gave their lives so that we could live in freedom and without fear.”

“We thank those who gave our lives to keep us free, and we shall not forget you,” he said. “We shall remember.”

Tony Bryant suffered a stroke in April while cleaning fish in his backyard. After he was discharged from Sentara Obici... read more