The postseason accolades continue to pour in for the Bulldogs after an incredible season. King’s Fork won the Southeastern District while also notching the most wins in school history, all while earning themselves the No. 1 seed in their region. KFHS also defeated the juggernaut that is Oscar Smith High School, stopping the Tigers’ 99-game winning streak in the Southeastern District.

Because of the success the Bulldogs have had, it was going to be hard for at least one Bulldog not to be represented on all-district, all-region and all-state teams. The Bulldogs completed the trifecta this week. The class 4 all-state teams came out this week, and Darran Butts and Chris Shearin were both selected. 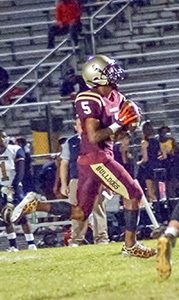 Chris Shearin was selected to the all-state Class 4 second team at defensive back.
Caroline LaMagna Photo

Shearin, a junior, made second-team all-state at defensive back. He has been one of the more productive defensive backs in South Hampton Roads and is one of the staples of the Bulldogs’ vaunted defense for three years now. Shearin was also selected a first-team defensive back in the district and the region.

“I am very grateful to be selected all-state,” Shearin said. “It just shows the hard work put in with my teammates is paying off. My teammates along with my defensive backs coach, Coach Prince, has helped me.”

Shearin currently has multiple offers from NCAA Division-I programs and as expected to have more coming in soon. He is also among the top recruited juniors in the state of Virginia.

Both Butts and Shearin were grateful for the season the Bulldogs had this year, even though they didn’t quite get the state championship they wanted. The team’s favorite moment of the season was the win over Oscar Smith, because of what it did for the school and the city of Suffolk.

“It was like the whole city was there,” Butts said. “Nobody thought we could beat them, and we proved a lot of people wrong.”

“Our confidence was at an all-time high this season, and it showed,” Shearin said.

Butts to head to NSU

Standout Bulldog Darran Butts has committed to Norfolk State University. The King’s Fork High School senior will not be too... read more