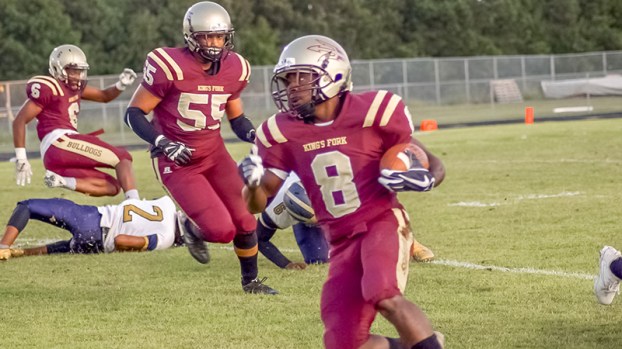 Butts to head to NSU

The King’s Fork High School senior will not be too far from the people of Suffolk who want to continue to see him play.

Butts, the 2017 Southeastern District Player of the Year, announced his commitment Monday evening. Hampton University was a close runner-up, but Butts liked the way the NSU staff kept in contact with him. He had interest from multiple NCAA Division-I and Division-II programs.

“It just felt like home,” Butts said. “The atmosphere and coaching staff was something like my head coach. They were hitting me up every day and made sure that my grades were good. They felt like I would be an asset to their program.”

Norfolk State has plans to keep Butts at running back. They also want him playing a role on special teams as a kick and punt returner. The coaches let Butts know he could come in as a freshman and be a big part of the program.

The first-team all-state running back’s family and coaches played a big role in his recruiting. They let him know to pick a school he thought was best for him, and he also wanted to keep his family in mind when making his decision.

“They didn’t rush my decision or anything,” he said. “They told me to leave it up to God, and He would lead me in the right direction.”

Butts did not become the full-time starter for King’s Fork until his junior year. His play grabbed the eyes of many college recruiters, as he led the Bulldogs in scoring. His senior year proved Butts could take his game to another level. He once again led the Bulldogs in scoring on his way to becoming Southeastern District Player of the Year and Regional Offensive Player of the Year. The rushing title in the district also belonged to Butts this season.

He accomplished all of that after the loss of his mother earlier this year.

“The last two years have been hard for me,” he said. “I overcame so many obstacles and worked so hard to get to where I am now. This is all just the beginning, honestly.”

NSU finished this season with a 4-7 record.

By James J. Lidington Special to the News-Herald Isle of Wight Academy hit a then-season-high nine three-pointers as they routed... read more