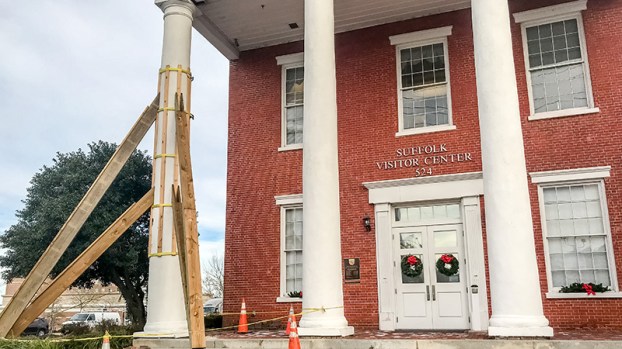 The front column of the Suffolk Visitor Center currently sits in a brace while waiting for repairs due to issues with the foundation. Repairs will begin after the new year.

Visitor Center to get brace off soon

The Suffolk Visitor Center on North Main Street is due for repairs after a crack in a front column revealed a problem with the foundation.

Gerry Jones, director of the Department of Capital Programs and Buildings, said a maintenance worker noticed a 2-inch crack at the top of one of the columns while cleaning a few months ago.

McPherson Design Group was called in to have its structural engineers investigate the problem. After closer examination, they determined the column had moved almost two inches from its original position.

The engineers also completed a geotechnical survey on the grounds to find the root cause of the foundation problem. They gathered cone samples of soil that went roughly 15 to 20 feet below the surface.

Jones said the engineering team found the column was in no danger of falling over and there was no immediate danger to the public, but they advised stabilizing the column so it wouldn’t move any farther.

“For the time being, they instructed us to put on the brace for support. It’s one of those situations that they would rather overkill than let something happen,” Jones said.

Since the evaluation, McPherson has been planning out the design work for the necessary repairs that need to occur to ensure the column will stay in place. They plan to use helical piles to give support to the foundation. The piles have the ability to return the column to its original position, but there is no guarantee.

The repairs will including adding concrete around the original brick footing for more structural support.

“Everything has been passed on to the contractor to get priced,” Jones said.

Jones anticipates plans for the repairs to be finalized before the holidays begin. This ensures that the work can begin after the new year. The repairs should be done about two weeks after construction starts. Nelson Enterprises will be in charge of the repairs.

Girls from Suffolk learned finance and good leadership at a Virginia Beach event ahead of next year’s cookie campaign for... read more