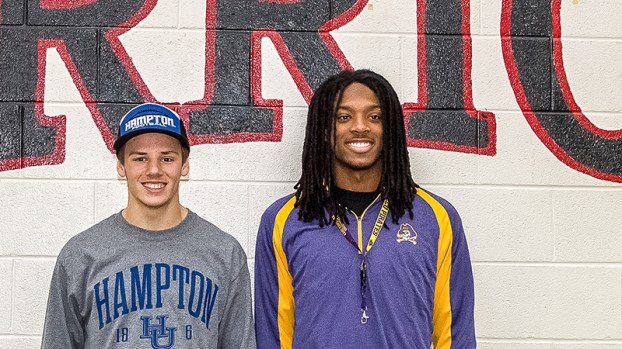 Nansemond River High School’s football team enjoyed its most successful season in school history this year. The Warriors finished with the highest win total in school history and also reached the Class 5 state semifinal and were one game away from competing in their first state championship game.

The Warriors had many productive seniors on the team that will be on a college football field this time next year. Over the summer, Stringer committed to East Carolina University. He stuck with them throughout the year and made it official by signing his National Letter of Intent Wednesday afternoon at Nansemond River.

Stringer finished up his senior season as a first team all-district and all-region player. He was also the Class 5 Region A Defensive Player of the Year. The future ECU Pirate was satisfied with his senior season.

“It went fantastic,” he said. “I am very happy with how I went out during my senior season.”

At ECU, Stringer will be playing outside linebacker. He believes they will put him in the best possible position to succeed. He also had offers from other NCAA Division-I schools. His major of choice is sports management.

Lomax has been a big part of the Warriors’ special teams over the last four years. The Warriors have won games off of the leg of Lomax. His recruiting process started to pick up this season, and multiple NCAA Division-I offers came in. He ended up committing to Hampton University.

“The people are amazing,” Lomax said of HU. “Every single one of their staff members wanted to get to know me on a personal level, which I think is really important. Especially Coach Prunty, he saw me as a person and not as a recruit and player.”

While other opportunities started to fade, Lomax said HU’s constant contact with him helped him make the decision. His family played the biggest part. Without them, Lomax said he couldn’t have made that decision without them.

The senior Warrior finished his senior year as a first team all-district kicker and punter and earned all-region honors as well.

After the Warriors’ season ended, coach David Coccoli talked about how thankful he was for what his seniors did for the program and the standard they are leaving. Stringer and Lomax were important parts of the Warriors building up their football culture to where it is now.