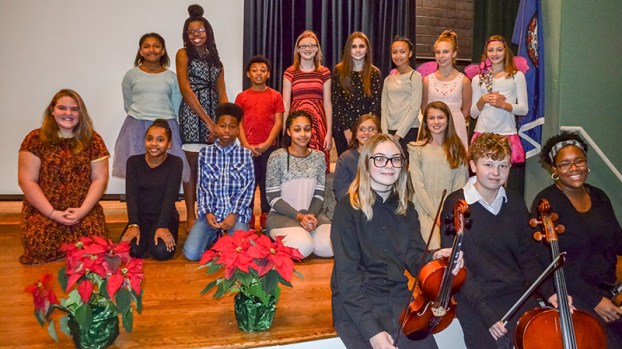 The stage was set for a night of theater at Forest Glen Middle School by students eager to put on a great show for younger peers.

The middle schoolers wrote fairy tales that twisted and re-imagined their favorite stories, then read them to Kilby Shores Elementary School teacher Cidra Davis and her first-grade class in October, Espinosa said. They had so much fun with the younger kids that they decided to spend the past two months practicing for a live show.

“I think seeing their stories come to life is very exciting for them,” Espinosa said.

The Forest Glen students brought two of their brief stories to life with costumes, props and music performed by Fine Arts Teacher LaToya Albritton and her students, Morgan Pulley and Peyton Jacobs.

Lauren Vann, 11, wrote “Sleeping Ugly,” in which a princess suffered an accidental curse from the spell of a fairy, who was played by Elizabeth Calleance, 11.

In “Myarella” by Chandrea James, 12, the classic story of a downtrodden heroine was adapted to a school setting, complete with a school dance.

“Everyone has to come out and just have fun like it’s a real dance,” said Abigail Vick, 11.

The middle schoolers enjoyed playing witches, royalty and pets for the crowd of first-graders.

“I like little kids, and I like to write stories and act,” said Emma Smith, 11, who played Myarella’s talking dog, Coco. Her brother Cameron, 6, was one of the first graders invited from Davis’ class. “He’s really excited for it.”

Espinosa said it was a great experience for her students to act on stage and work through their jitters.

“They’ve never really had an experience like this before, and that’s where the jitters come in,” she said. “But all actors get that.”

Chandrea said she had butterflies in her stomach in the beginning, but the excitement from the audience gave her confidence.

“They were really into it,” she said.

After the show, first-graders got copies of the sixth-graders’ illustrated stories signed by the authors themselves. According to Davis, her students had a wonderful time.

“They love stories, being read to and acting out,” she said. “I know they totally enjoyed it.”

‘Tipsy Tow’ offered for the holidays

With the two biggest holidays of the year, Christmas and New Year’s, right around the corner, drivers have plenty of... read more