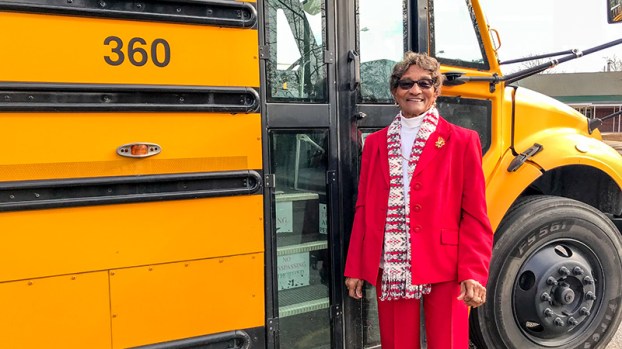 Virginia Hill, 77, stood by her old bus at Oakland Elementary School where she retired after 46 years on the job.

It was an emotional day for Virginia Hill on Wednesday as she said goodbye to students getting off the bus for the last time.

Hill, 77, retired from driving the school bus, which she nicknamed “Betsy,” at Oakland Elementary School. She has been driving for Suffolk Public Schools for 46 years.

“I began to look at it as my age,” Hill said. “I just felt like it was time to step down.”

“Mom enjoyed her time. She loved every day that she was on that bus. She still loves it,” said Queenie Mason, Hill’s youngest daughter.

“The Lord blessed me every morning waking up to start a day to go and pick up my precious cargo on time and try and get them to school on time. I loved driving the bus for the school,” Hill said.

She loved her job so much, Mason remembers her going years before missing a single day of work, because she never wanted anyone else to pick up the students.

Generations of children have been on Hill’s bus during her four-decade stint. She’s driven the children and even the grandchildren of some of her first children.

Hill even had the pleasure of driving her own children back and forth to school on the bus.

“I remember I would have to run out the door some mornings to catch the bus,” Mason said. “She was always on time. I had to be ready.”

The kindness Hill had for everyone, including other bus drivers, won’t be easily forgotten as she settles into retirement. Hill received messages from other bus drivers wishing her well and expressing how much they will miss her smile while driving.

Mason said her mother always drove with a smile.

Though Hill is looking forward to some downtime, she will certainly miss the children the most.

“I’m too attached to the students, and I cried all day,” Hill said about Wednesday.

Residents of Suffolk nursing homes got holiday gifts thanks to charitable Moose men and women. Suffolk Women of the Moose... read more