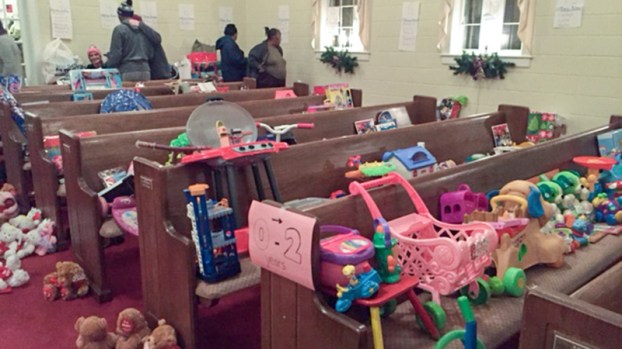 Western Branch residents came together online and in person once again this year to help children enjoy Christmas in their community.

More than 120 members of the Western Branch Philanthropy Facebook page volunteered for the group’s second annual Secret Santa this year.

Since the weekend after Thanksgiving, residents were encouraged to contact Western Branch Philanthropy Administrator Karen Pinegar if they know of families in need, and Pinegar herself contacted principals at each of the seven Western Branch schools, she said.

On Wednesday, more than 150 children received their gifts at Covenant Methodist Church, which was three times as many children that were supported last year, Pinegar said.

“The word just got out and more people wanted to be involved,” she said. “I had a list of people waiting for a child (to sponsor).”

The church was filled with bicycles, trains, gaming systems and numerous other gifts that made each child smile.

“You name it, we pretty much had it,” she said.

Pinegar and at least 20 volunteers led children to their holiday surprises as the line of parents and children wrapped around the church Wednesday evening. Sponsors also had the opportunity to meet with their recipients.

“There were recipients and donors crying,” Pinegar said. “It was such a heartwarming feeling to see that we could help strangers like this.”

There was also a collection of additional, gently used or new toys for the families, and another giveaway was held on Friday at the church to distribute the remaining toys.

Pinegar said she hopes to double the turnout for next year’s Secret Santa.