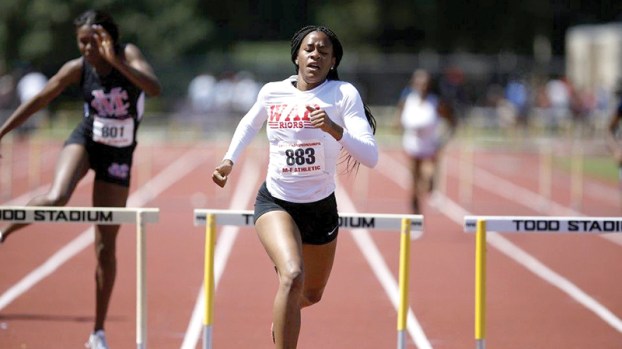 Kori Carter returns as one of the elite hurdlers in the state and country for Team WAR. (John Herzog Photo)

The Nansemond River High School track and field team continues to be a top-level program.

Th Warriors track and field team has been one of the top programs not only in the state but also in the country as well. This season, the team returns to try to win its sixth indoor championship. The team will look a bit different this season, as the Warriors graduated some big-time athletes. Statistically, the Warriors may have lost about 12 All-Americans from the last two seasons. However, the Warriors still remain competitive on every level.

Last year saw the ascension of the boys’ team. In years past, much of the talk has been about the girls’ team, and rightfully so. In the outdoor season last year, the boys’ team took the state championship in the 4×200. They returned all of their key runners from that team.

“I am really liking where the boys are headed,” Warriors coach Justin Byron said. “Last year, I felt like they could do something special, and they did when no one else was believing in them. If we can stay focused, the sky is the limit for these guys.”

Daiqwuan Faircloth started off the season hot, running one of his fastest times with 50 seconds on a flat track. JeVon Waller also returns as one of the Warriors’ top sprinters.

The girls’ team graduated a significant amount of talent; however, Team WAR still possess some elite talent. Leading the way is Kori Carter, who is among one of the top hurdlers in the state and nation as well. Carter recently ran one of the fastest times on a flat track. Team WAR also returns Brene Donaldson and Asia Crocker. Even though some may think Team WAR might not be what they were the past two seasons, they don’t worry about that.

“We set our own expectations,” Byron said. “Our staff does a good job not putting any pressure on our athletes.”

For the past few years, Nansemond River has taken the approach of slowing building up through regular season meets so that they can peak at the right time during championship meet season.

“We are putting in the foundation now that is going to set us up for the championships,” Byron said.

NRTF will compete in some significant meets in January. They will participate in the Milestat meet before heading towards the regional championship meets.