White lets game do the talking

D.J. White was voted Suffolk News-Herald Player of the Week after a 14-point performance against Summit Christian.

White, a senior at Nansemond-Suffolk Academy, has been an integral part of the Saints’ boys’ basketball team this season. NSA has gotten off to a good start in the first half of its season with a 5-2 record. However, White thinks NSA can start playing even better as the season goes on.

“We have been playing pretty good and have been getting better every day,” he said. “Our chemistry has gotten better, and everyone only wants one thing, and that is to win. Once our point guard George Pettaway comes back, we will be even better.”

Last week, NSA hosted a holiday tournament. The Saints took on Summit Christian School in their first matchup in the tournament. They grabbed the win behind 14 points from White. He felt like he could have done more but otherwise was happy with his effort in the win. 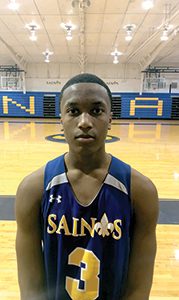 D.J. White was voted Suffolk News-Herald Player of the Week after a 14-point performance against Summit Christian.

“I feel like I may have could have scored more, but I did what the team and coach needed me to do to help us win.”

Individually, White is satisfied with his season up to this point but feels he can play at a higher level. He wants to become aggressive and attack more, because he believes if he does, it opens up better passing lanes for his teammates.

He has lofty goals this year he feels he can reach. First, he wants to become a better leader for his team. That will translate to him becoming a better player in hopes of him also becoming the Player of the Year at the end of the season. He is an unselfish player who loves getting his teammates involved while also being disruptive on defense.

White is motivated by family members who have passed away, including his grandmother, Delores, little brother, Jaeson, stepmother, Maya, and little sister, Jamallah. White believes they are proud of the things he is doing.

“I know they would be big fans and would be proud of me to see me playing basketball,” White said of his family.

His dad also is a very big inspiration to him and always encourages him to do his best.

White’s favorite player is Hall of Famer Allen Iverson for many reasons. He was a tough player who excelled in the NBA despite being somewhat undersized. Every game he played as hard as he could no matter what. White likes to model his game after his father, who was a star point guard when he played.

Away from basketball, White can be found hanging out with his family and playing video games. The senior has plans to play in college and has received interest from a couple of schools.