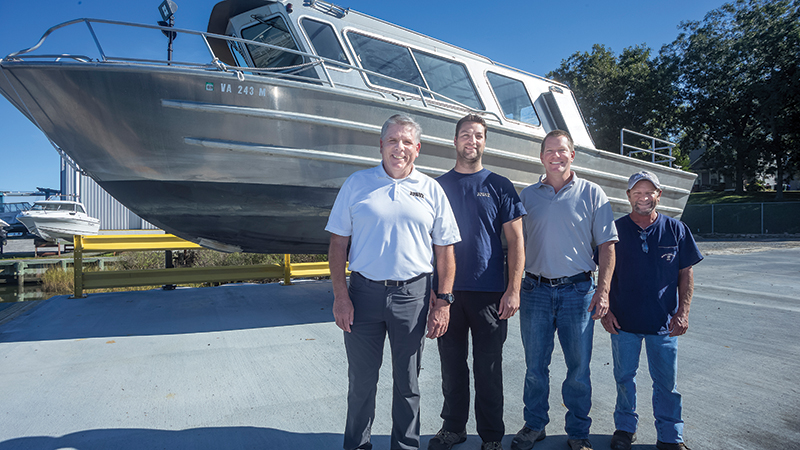 From left, Bob Crocker, Dan Opipare, Dave Wilson and Larry Williams stand in front of one of the aluminum boats — this one known to folks at Volvo Penta as Bob’s Ark — that the company uses to test engines and other technology at its testing center in Eclipse.

That’s the record for a small team in Eclipse that specializes in being able to make quick work of switching out propulsion, fuel, steering and other systems in a fleet of 30 boats ranging from 18 to 44 feet in length.

When it was all over, he recalled recently, “I hurt all over.” 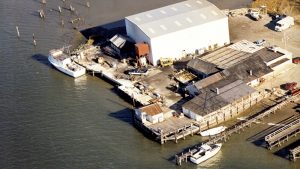 An aerial view taken right after Hurricane Isabel in 2003 shows some of the damage that was done to the boathouse and other facilities at the Volvo Penta testing center in Eclipse. (Photo courtesy of Volvo Penta)

For Bob Crocker, who manages the test center, it isn’t a matter of “time is money” so much as it is that time is man-hours. Lost man-hours, he says, can never be regained.

So when the team has a big project to compete, not a moment is wasted.

Crocker’s five-man team — along with a hired crew of boat drivers that varies depending on workload — is in charge of product testing for the Swedish company’s gas engines and for its diesel engines up to six liters, along with the propellers and electronics systems manufactured and marketed by Volvo Penta.

In conjunction with engineers working at the Volvo Penta USA headquarters in Chesapeake, the Suffolk team, working from a gated boatyard and marina on the banks of Chuckatuck Creek, fabricates and tests prototypes for engine parts, state-of-the art propellers, environment-friendly emissions systems and more.

The facility has boats in the water undergoing various tests seven hours a day, five days a week, Crocker says.

That might sound like a dream job for those who like to spend time on the water, but he’s quick to note the monotonous — and sometimes grueling — conditions his boat drivers sometimes face.

Some tests might require a driver might to keep his boat moving at a certain speed for an entire day’s worth of testing — all while navigating a relatively small area, bounded by the James River ghost fleet and the old King’s Highway Bridge crossing on the Nansemond River. The only things that stop the on-water testing are fog and lightning. 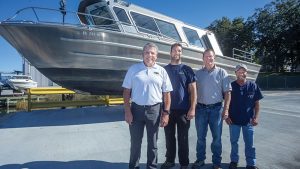 From left, Bob Crocker, Dan Opipare, Dave Wilson and Larry Williams stand in front of one of the aluminum boats — this one known to folks at Volvo Penta as Bob’s Ark — that the company uses to test engines and other technology at its testing center in Eclipse.

“What we put our boats through, no customer would ever put them through,” Crocker says.

Drivers are given checklists to watch and are rotated from one boat to another on a regular basis so they don’t become too used to the sounds and peculiarities of any particular boat. And even the most-seasoned can be prone to seasickness when it’s time for turn testing, which sends them on an endless slalom course.

“It’s not a great job,” Crocker says of the test drivers. At the very least, it’s not a job for just anyone who thinks he loves spending time on the water.

But the sacrifices those drivers make — along with the ingenuity of the designers, technicians and others at Volvo Penta — have made it possible for those who do love to spend time on the water to do so with fewer worries and headaches, says Crocker, who will celebrate his 29th anniversary with the company in January.

“Innovation is in our DNA,” he says. “We’ve always been out — way out — in front of everybody else.”

As evidence, Crocker points to the company’s forward-facing drive system that improves safety and performance for wakeboarding, he notes that Volvo Penta was the first company to supercharge a diesel engine and he describes the development of a one-point drain system as a response to the company’s “easy boating initiative.”

All of those innovations are tested on Chuckatuck Creek at some point in their development.

“You couldn’t ask for a better location as far as testing for a marine environment,” he says, noting that weather conditions range from hot to cold and that waters nearby run the gamut from fresh to salt.

“We can test year-round here,” he says.

And he takes pride in the efforts the facility has taken to set environmental standards, even as it burns through a couple of thousand gallons of fuel a month.

The Eclipse facility is a Virginia-certified “clean marina,” he says, noting the contrast to what he was told was a Superfund site when Volvo Penta bought the property in 1994.

Thanks to a couple of recent Eagle Scout projects, there’s now an oyster sanctuary alongside the marina, and a partnership with the Nansemond River Preservation Alliance has resulted in marshland grass being re-established around the facility.

“There has been some type of marina or shipyard here since the 1800s,” Crocker says, and today’s environmental footprint today could well be smaller than ever before in that maritime history.

As he makes the point, a small boat inscribes figure eights in the creek beside the docks. Another engine has been switched onto another boat, and another series of tests has begun.