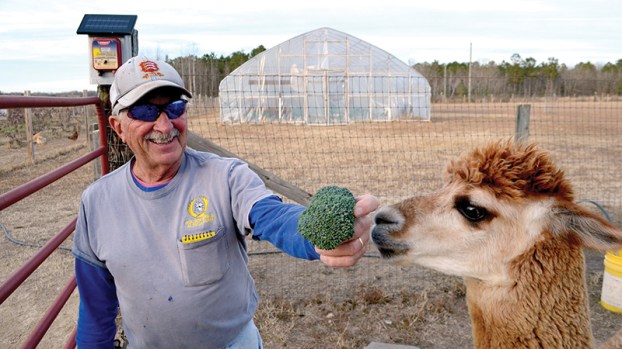 John Gasser offers some broccoli to one of the alpacas at the Golden Eagle Alpaca Farm in the Somerton area that he co-owns with his wife Iris.

John and Iris Gasser have made a living on their 12 acres of Somerton-area farm land since they first opened Golden Eagle Alpaca Farm in 2009.

The name was one of many written on a notepad as the two were driving back from an alpaca show in Lexington years ago, John Gasser said.

“We just kept throwing names out and she’d write them up,” he said. “One of them was “golden eagle,” and that was the one she liked the best.”

The couple recently announced that they are retiring Golden Eagle Alpaca Farm and moving on from Southeastern Virginia. John Gasser said that work on the land was brutal in the hot and humid seasons. 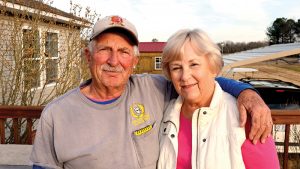 John and Iris Gasser have operated Golden Eagle Alpaca Farm in the Somerton area since 2009.

Seven alpacas remain on the farm after half of the couple’s herd was recently sold, along with their last llama, he said.

The couple raised alpacas, sheared them every April and cleaned the fibers. Alpaca coats can grow up to six inches and produce about seven to ten pounds of fiber annually, according to alpaca.com.

Mills and artisans use the fibers for hats, scarves, teddy bears, rugs and anything else you could do with sheep’s wool — but just a little bit better, John Gasser said.

“I have sheep farmers that wear my socks,” he quipped.

The couple’s plan initially was to raise alpacas and keep a simple garden, but the 2008 financial crisis showed that they needed more than just alpaca fibers.

“We realized early on that we would have to diversify, because alpacas weren’t going to carry the farm year-round,” he said. “We diversified into produce and laying hens, and that worked really well.”

It was early on that John Gasser discovered the dangers of chemicals, and  he also turned away from methods like hydroponic growing and black plastic.

This led him to Certified Naturally Grown methods, a system of organic farming with much stricter standards for what’s considered “natural.” The farm had officially received CNG status by 2013.

“I did it because I eat this food, and I don’t want that crap in my stomach, liver and heart,” he said.

These methods helped achieve a “balance” on the farm, he said, in tandem with the benefits of its animal residents.

In summers, the alpacas have been moved from one part of the farm to another for “intensive rotational grazing.” Unlike other grazers, these animals only eat a few inches of the grass without pulling out the roots and leaving the land bare.

“That adds vegetative matter,” John Gasser said. “They’ll just go around the farm day after day, and I just keep moving them with electric lines, and it really works. We had the most awful, bare ground here, and little by little it’s gotten so much better.”

About a dozen guinea fowl roam and keep the property free of ticks. Geese are put with the flocks of chickens to protect against predators, along with roosters.

“They don’t do quite as good a job, but they do fairly well,” he said about the roosters. “Besides, I like hearing the roosters in the morning.”

Best of all, the crops have mostly avoided damage from Japanese beetles and other problematic insects, thanks in part to more than 100 bird houses that draw purple martins to act as more pest control.

Golden Eagle Alpaca Farm will officially come to a close at the end of the year, with no plans for new crops since the land was put up for sale, he said.

The couple will split their time between Western Branch and a small cottage in New Hampshire, where John Gasser looks forward to hunting, fishing and skiing.

But as the couple says goodbye to the quiet, serene place they made for themselves, the farewell remains bittersweet.

“I just love it out here,” Iris Gasser said. “The most beautiful sunrises and sunsets. When it’s foggy and you look across the fields, it’s just beautiful and quiet. “

“Except for when my dogs bark,” she said with a laugh.

John Gasser said it’s rewarding to have seen their farm come together so well after years of hard work. He hopes that the next owners of the property do some gardening of their own.

“It’s in perfect condition,” he said. “You don’t have to do a thing here to grow good vegetables and fruits, except just keep after it.”

Congressman Donald McEachin, VA-04, rolled up his sleeves to help hand out food to dozens of residents in line on... read more