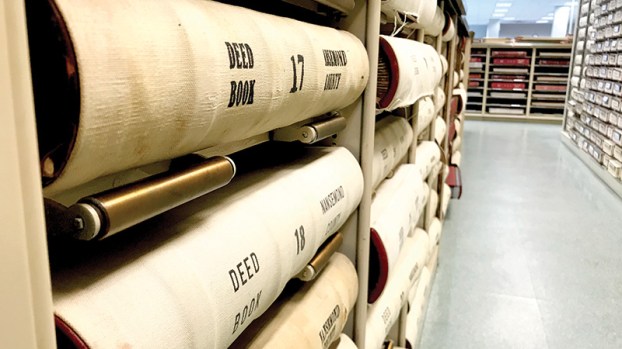 The Suffolk Circuit Court will scan all records from 1866 to have a completely digital land records system by December 2018.

Documents move into the digital age

The Clerk of the Circuit Court’s office is getting a major technological upgrade going into the new year that will continue the trend of being completely paperless.

A project started this month to have digital images of all old Circuit Court records dating back to 1866. The project is estimated to take a year, finishing in December 2018.

“It’s time to have everything imaged. Using the old books is tedious, and there’s a better way of doing it,” said Randy Carter, Clerk of the Circuit Court.

Logan’s System Inc. is tackling the year-long project as well as handling the land records system where all the data is stored. Any films that need to be imaged will be taken offsite, but the company will bring in their own equipment to scan the records books in the clerk’s office.

The project is estimated to cost between $216,000 and $226,000. A definite price won’t be reached until the project comes to an end, because the cost depends on how they can get the images loaded into the land records system. The films on which some books were recorded may not be helpful to use if the glass has been scratched or the image is too grainy to view properly.

“Some of the books weren’t filmed. If we can use film, it cuts the cost way down,” Carter said.

The project will be possible due to fees citizens incur when they have to file something with the Circuit Court.

“We are allowed to charge a $5 fee for every land recording and civil action filing. We get $4 back, and $1 goes into a technology trust fund. We have the ability to carry money over year-to-year,” Carter said.

Having the images uploaded to a server is helpful to title examiners, researchers and even land owners. Rather than everyone having to look through indexes to pull books, the new land records system will allow everyone the ability to conduct a search online for the documents they are looking for.

“We are a customer service organization. It’s our job to make it more customer friendly. We can make them more efficient, and it’s a win-win. We are able to process everything faster,” Carter said.

Everything from Jan. 1, 1974 to the present is already imaged.

“Back in 1998, we started imaging documents. My predecessor had everything backscanned to Jan. 1, 1974,” Carter said. That date is significant because it is the date that Suffolk merged with the city of Nansemond — the former Nansemond County — and became the city of Suffolk.

Unfortunately, the documents can’t go back any further than 1866 for Suffolk, unlike other localities that have access to records from the colonial period. Two fires wiped out a majority of the old records.

Harbour View East in North Suffolk was packed with heaps of shoppers the day after Christmas, but many of them... read more