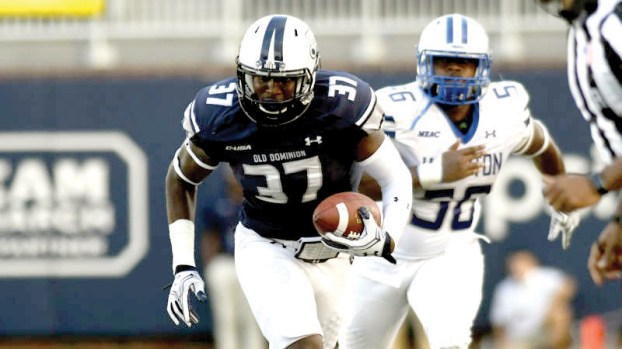 The ODU junior had a pretty productive season. He started at linebacker for the Monarchs and finished the season with 97 total tackles, which led the team while adding 3.5 tackles for loss, four pass breakups and a fumble recovery.

To many, that stat line is pretty impressive, but to Branch, he felt he was capable of better.

“I thought there were a lot of things I could have done better out there,” Branch said. “But all of it was a great learning experience for next year, so I can finish my senior campaign strong.”

ODU finished with a 5-7 record this season, and Branch enjoyed some of his most productive football. He had two games this season in which he recorded a career-high 14 tackles, and another game where he notched 13 tackles.

Since the end of his sophomore season, everything has been a whirlwind for him. After being a walk-on his freshman year, he worked his way up to playing time in his sophomore campaign. Shortly after his sophomore season, he was awarded a full scholarship by the ODU coaching staff in a surprise presentation. From there, Branch went on to become a starter at linebacker for the Monarchs this season, and he has enjoyed every minute of it. He took on a lot of responsibility this season, as many of the younger linebackers were injured.

“I been enjoying all of it,” he said. “I am blessed to be in this position. There are a lot of people who would love to play NCAA Division I football, so I do not take anything for granted. Coming to ODU as a walk-on and then earning a scholarship has taught me lessons I can take forward in life. I wouldn’t trade anything bad or good that has happened to me along this journey so far.”

Branch had personal goals to achieve 100 tackles this season and become an all-conference player. He came three tackles shy of 100 and didn’t make all-conference. However, Branch mentioned that slightly missing out on his goals has been on his mind since the season ended last month. It is going to motivate him in the offseason to work even harder so he can achieve those goals next year.

“It is definitely going to add fuel to each workout I do this offseason,” he said. “It made me realize I must not have worked as hard the last offseason, so I know I just have to go harder this time around.”

The former Nansemond River Warrior is a heavy critic of himself. However, he has come a long way. He has not only walked on to a Division I football team but also has been awarded a scholarship, ascended to a starting position and led the position group.

Even though Branch gives himself credit for what he has been able to accomplish so far, he is always looking for more.

“I talked with my position coach and my head coach, and they have both expressed how well they felt I played this season,” Branch said. “They are proud of me but are ready to get back to work for next season so I can be even better.”

With one more season left in college, Branch is looking to make it a memorable one.