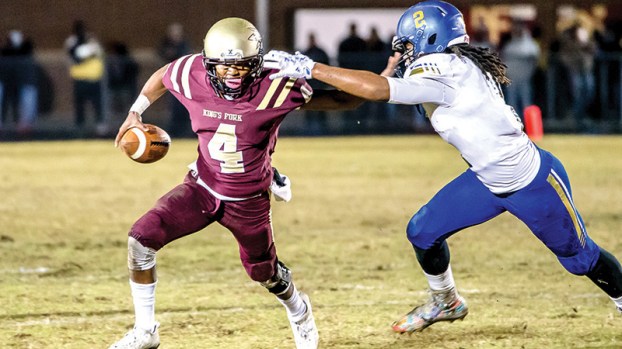 The schools of Suffolk collectively had a successful season that included many highlights and good things from each team. King’s Fork is pictured in a game against Smithfield High School. (Danny Haymond photo)

A successful year for Suffolk football

The schools of Suffolk had a successful football season this year.

The Warriors, Cavaliers, Bulldogs and Saints combined for a 31-18 record. This season also included three teams earning playoff berths and two teams advancing all the way to their respective regional championship game.

The athletes who play for King’s Fork High School, Lakeland High School, Nansemond River High School and Nansemond-Suffolk Academy all believe Suffolk is a city which has long had talent. In years past, the city may not have been as successful as a collective in a single season, but this year is a big step in that direction.

Even though NSA was the only school not to make the playoffs this season, they did finish with a 6-4 record. Nansemond River advanced all the way to the state semifinals this year, which is been the farthest a Suffolk public school has gone in a season. King’s Fork won the Southeastern District for the first time in its history. Lakeland was the No. 7 seed in its region and knocked off the No. 2 seed, becoming the only No. 7 seed to win a playoff game this season.

There were many shockers that involved a Suffolk school as well. The most impressive was King’s Fork defeating Oscar Smith High School. The powerhouse reigned over the Southeastern District for nearly 10 years, and King’s Fork ended a 99-game district win streak. The fact the Warriors ran the table in the regional playoffs after switching to a whole new offense left many in shock as well. Lakeland had not been given a chance by any in the playoffs before they knocked off the No. 2 team.

The success of this year for Suffolk may have put more seniors in position to further their education and careers while also putting more spotlight on underclassmen.

All in all, athletes and coaches were excited about what the city was able to accomplish this season in football and are hoping this is the beginning for the city as a whole to keep progressing in the sport.