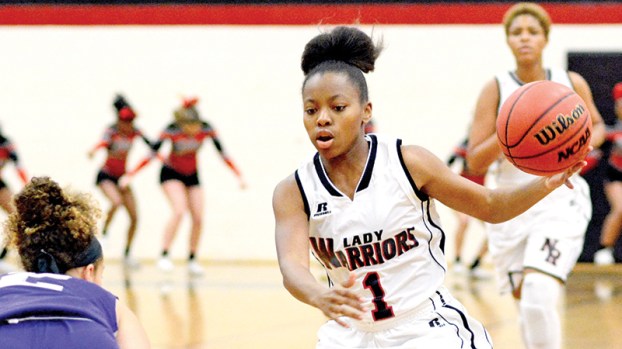 Briana Autrey was voted the Suffolk News-Herald Player of the Week after her 27-point performance against Indian River High School.

Briana Autrey was voted the Suffolk News-Herald Player of the Week after her 27-point performance against Indian River High School.

The Nansemond River High School girls’ basketball team has an entirely different look this season. They have nine new players, but at the center of the new team is Autrey, who returned as the sole leader of the team for her senior season. Even though the Lady Warriors haven’t started off exactly how they wanted to, Autrey believes there are good things to come for next year.

“We are having a bit of a rough start,” she said. “But I think we will bounce back after the break. We have been getting in the gym trying to get some work in, so I think we will grow as a team and get better as the season goes by.”

Because of the team being so young, Autrey has had to take on a bigger role this season. She has already learned a thing or two, and she believes the key to becoming a better leader is patience.

“The girls are so young, and with that mistakes happen while people learn,” Autrey said. “Leading all becomes worth it when I see them learning and growing and becoming better teammates.”

Before the break last week, Autrey scored 27 points in the Lady Warriors’ win over Indian River. It was a remarkable performance by the senior, who had not been feeling well the whole night. Autrey was playing with a headache but credited her teammates for helping her push through mentally and physically. The point total is the second-highest Autrey has scored this season; she had 30 in an earlier game.

“My teammates helped me out big time,” she said. “The bigs were crashing the boards, and then I could kick it out to my wings for shots. My teammates made it easier for me to go out there and have the game that I did.”

Autrey came into her senior season wanting to win as many games as possible. She also wanted to make sure she worked hard to make her teammates around her better by being a more effective leader. Over the summer, she played AAU basketball. She didn’t have the role on that team that she has for Nansemond River, so it helped her learned to adjust. After AAU, she came into the preseason working on her game and doing things to stay in shape. She played volleyball for the Lady Warriors in the fall to help stay in shape and improve on timing and footwork.

This season, Autrey is considered one of the premier talents in the area for girls’ hoops. She is averaging more than 15 points per game and hears the noise from outsiders about being one of the top returning seniors for this season. When she was a little girl, she had dreams of being considered among the best. Now, she doesn’t pay it too much mind. She works on her game and lets that do the talking.

Before the season started, Autrey committed to Air Force Academy after multiple offers from NCAA Division I schools.

The Lady Warriors along with Autrey will be back in action Jan. 2 when they take on Western Branch High School.