Hosting the Armstrong Wildcats from Richmond, the King’s Fork Bulldogs knew they would be in for a battle in the opener of their holiday tournament on Friday night.

Despite taking a brief lead late in the second quarter, the Bulldogs were unable to take down the Wildcats, falling 63-54. 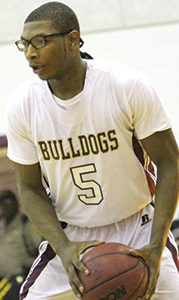 James Hatton looks for a play for the Bulldogs during their loss to Armstrong High School in their holiday tournament. (Matthew Hatfield photo)

“I knew what type of game it would be. One thing about Richmond guys is they’re coming at you. It’s not a case where you’re taking any steps back,” King’s Fork’s first-year head coach, Rick Hite, said after the game.

“For the most part, I thought our guys stood up, competed, but we just didn’t make enough shots. Once we missed, it triggered their offense, and Finney was able to get finishes at the rim.”

King’s Fork finished 21-of-60 (35 percent) from the field, while Armstrong converted 50 percent of its shots, 26-of-52. The Bulldogs offense didn’t run nearly as smoothly with 6-foot-2-inch junior guard Tre Bailey out with the flu.

“With Tre being out, we’ve been in scramble mode, trying to see if he would be able to go or not,” said Hite, noting his absence was felt as much defensively as it was offensively. “You’ve got to have guys who can defend against a team like Armstrong, because they constantly attack you.”

In a back-and-forth first quarter, Armstrong nudged ahead on a three-pointer to take an 11-10 advantage. They soon increased that lead to as much as seven points at 25-18 with 3:31 before halftime. Then King’s Fork had its best stretch of the night, going on a 7-0 run in a span of 1:24, tying the game on James Hatton’s three-pointer. The Bulldogs even went up 28-27 on another three-point basket, courtesy of junior Darrius Wilson.

Down only 31-30 at the half, Hite liked where his team was, in position to seize control in the second half on their home floor. They even had 11 different Bulldogs score in the first half.

“I thought we had a chance,” he indicated. “We tried to go strong to the basket, weren’t as successful in doing that as we’d hope, and it let them get out in transition.”

Armstrong 6-foot-5-inch senior forward Dominique Finney took complete control in the third quarter, throwing down four of his five dunks. The Wildcats outscored King’s Fork 14-5 during the period, watching their lead balloon to double-figures. King’s Fork went just 1-of-11 from the field in the third period, putting themselves in too deep of a hole to climb out of in the fourth quarter.

A total of 17 turnovers, 10 in the second half, and shooting less than 50 percent from the foul line (6-of-14) cost the Bulldogs from drawing closer down the stretch.

“We’ve got to be good at that,” Hite admitted of the free-throws and turnovers. “We have to be able to finish or at least get to a stripe. Then, make it when we get there because when you miss two, that’s like a turnover. Live ball turnovers and bad shots kill us. Twenty-one (3’s) is also too many. It was almost as if we were trying to get it all back in one shot. We’ve got guys who can make 3’s, but that’s not how we’re going to win.

“We’re a guard-driven team. If our guards are struggling, it shows.”

Hatton was the lone double-digit scorer for the Bulldogs with 15 points.

At 4-3 overall after the game, King’s Fork played city rival Lakeland in Saturday’s consolation matchup. Following that, Armstrong took on Nansemond River in the championship game of the holiday tourney.

All three losses for King’s Fork this season have been to top-10 ranked teams in the state in Oscar Smith and Western Branch, both out of Chesapeake and the Southeastern District, as well as Armstrong.

Hite hopes the competition they’ve faced will make them better when the playoffs roll around.

“We’re trying to use December to get us to February and March,” Hite noted.

Lakeland High School’s swim team is low in numbers but features a dedicated slate of athletes who are improving their... read more