Firefighters responded to a chimney fire at a home in the 5700 block of Godwin Boulevard on Friday afternoon. 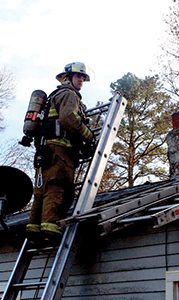 The fire extended into the attic and was marked under control about 3:50 p.m. The occupant was not displaced, and there were no injuries reported at the scene.

One lane of Godwin Boulevard was closed while crews worked the fire.