‘He was a superstar’: Community mourns pro baller, mentor to kids

The Suffolk community is mourning the loss of a local basketball legend who became a beloved mentor to countless young people.

Michael “P-Bird” Britt passed away from health complications on Christmas Day at age 57 in his Smithfield residence. The cause of death was likely related to a heart complication, Britt’s sister, Marcella Goodman, said.

Goodman knew him as “brother,” while many others in the city knew him by his basketball moniker “P-Bird.”

“Everybody loved him,” Goodman said. “I’ve had so many phone calls expressing the love that they showed for my brother.” 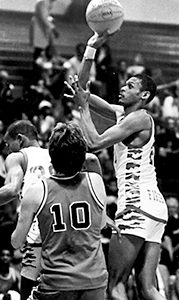 Britt grew up on Wilson Street in downtown Suffolk and attended Suffolk High School, where he made a name for himself on the basketball court. His longtime friend and former high school teammate Donald Richardson said his tenacious, vertical ball skills left crowds reeling.

“It was like a grown man playing with little boys,” Scott laughed. “He punished us.”

Britt played college ball for University of the District of Columbia, where he scored a record 52 points in a game against Southeastern University in his freshman 1979-1980 season.

He pushed the UDC Firebirds to an NCAA Division II Championship title in 1982, and in 2012, he was inducted in UDC Athletics Hall of Fame.

“He was the most exciting basketball player to ever come out of Suffolk,” Richardson said. 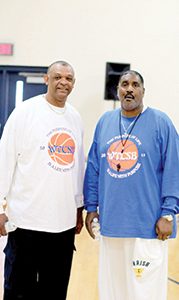 Britt was picked by the Washington Bullets in the second round of the NBA draft and played all around the world in a variety of overseas leagues after being cut by the Bullets.

But his life spiraled out of control when he began using crack cocaine and was arrested for possession and distribution around 1992, Britt told the Suffolk News-Herald for a 2012 article.

He spent most of the next 18 years in prison, including a six-and-a-half-year sentence that ended in 2009. He got treatment in the Portsmouth Victory Gospel Chapel residential program in 2010 while his mother, Bernice Cherry, Goodman and many others prayed for him.

One of those praying for his recovery was Ethel Babb, who had a romantic relationship with Britt off and on for more than 30 years until his death. Although they weren’t married, Britt always introduced her as his wife, she said.

Not one to be kept down for long, Britt used his past struggles with drugs to inspire others. He openly and frequently shared how God had changed him.

Britt was a firm, caring mentor to the many kids that attended his basketball clinics over the years.

Other former basketball players would help Britt teach ball handling, shooting and rebounding, while also explaining the dangers of gangs, drugs and violence based on their own mistakes.

“I always had a vision to want to just teach kids to play basketball, so they won’t make the same mistakes I made, the same decisions and choices I made,” Britt said in 2012. “I know that I can be of use. I’ve got the Word of God inside of me.”

Councilman Mike Duman assisted with Britt’s basketball clinic, and Britt worked for Duman and with his longtime friend Scott at Mike Duman Auto Sales for the last five or six months of his life.

“He was very well liked in the community and respected, both for how he had played during his time on the court, and for his willingness to give back to the community,” Duman said.

“P-bird” will also be missed by other children he mentored, and many more who called him friend or family.

“He was a superstar,” Goodman said.

T.E. Cooke-Overton Funeral Home in Suffolk will hold visitation from noon to 7 p.m. Friday, with family present from 5 to 7 p.m. The service will be held at New Mt. Joy Food for Living Ministry at 307 County St. at 1 p.m. Saturday.

Firefighters quickly extinguished a fire in the 100 block of Lewis Avenue on Saturday afternoon. The fire was reported at... read more