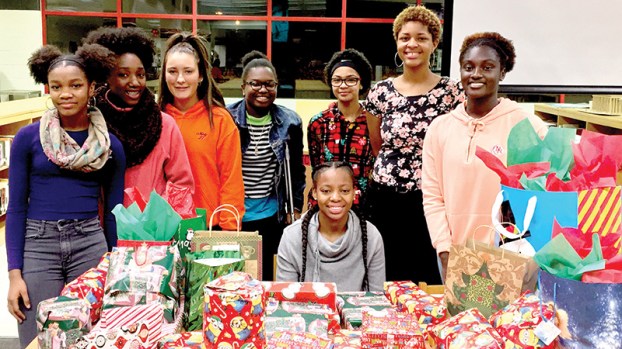 The Nansemond River High School girls’ basketball team helped a family in need for the holidays. Some of the players are pictured with the gifts, which they delivered to the family’s home on Christmas morning. (Tiffany Mason photo)

As usual around this time of year, the Lady Warriors adopted a family to spread some holiday cheer. Last year, they went on Christmas morning to deliver gifts to a family, and this year they did the same. Coach R. Calvin Mason Sr. and his team learned about a family that was in need and took the initiative to make the family’s Christmas special.

“It is one of those situations where you just want to be helpful,” Mason said. “The girls always do a good job with this project, and this year was no exception. I was very proud of everyone, and they were all excited about what they were doing.”

Nansemond River helped a single mother of three kids put a smile on their faces. They got toys and clothes for the family while also making a meal for the family.

“They went way beyond what I imagined them doing,” Mason said. “They gave from the heart, which was the most important thing.

“When the kids unwrapped the gifts, they were so happy, and the mother was so happy about what we got her as well,” senior Briana Autrey said. “I could tell we did something really good for them, and they appreciated it. Each time we do this is a new experience, because different families have different struggles.”

Both the track and field team and the girls’ basketball team helped families for the holiday season, something Mason said helps people to see the athletes in a different light.

“They see these athletes perform, but a lot of people don’t see them for the good people that they are,” Mason said. “They are contributing something to their community, and this is something they really want to do and are showing people who they really are. All year we try to be involved with what’s going on with our community. These kids are the community, and you can’t take something out without giving back. They are doing good things and are setting examples for those behind them.”

The Lady Warriors have adopted a family every year that Mason has coached the program. He said there isn’t enough light shined on the good things happening.

“Once someone sees you in a positive light, it can change how other people view you as well,” Mason said. “The kids gave with their heart and gave with their time. This wasn’t anything I was forcing them to do.”

On the basketball side of things, the Lady Warriors are adjusting to what is mostly a new team. They graduated or transferred more than five players off of a conference champion team last season. So far this year, everything has been an adjustment. Nansemond River has nine new players on the team, and Mason see his team making progress.

“I told the girls we have a puzzle and the pieces are all over the table, and we are slowly putting them together,” Mason said. “They work hard, and nobody has gotten discouraged. I like what we have.”

A successful year for Suffolk football

The schools of Suffolk had a successful football season this year. The Warriors, Cavaliers, Bulldogs and Saints combined for a... read more