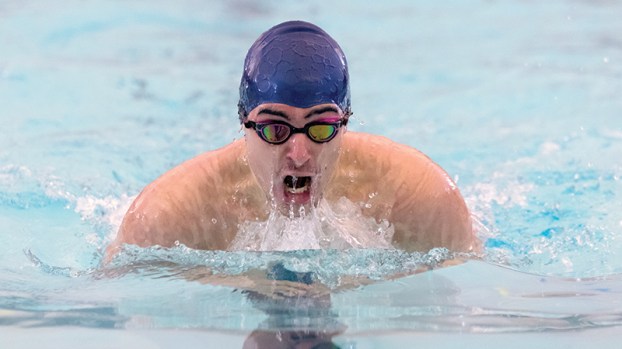 Josh Bennett competes in the breast stroke for Lakeland High School. The team is small, but the individual swimmers are determined to improve their times this season.

Lakeland High School’s swim team is low in numbers but features a dedicated slate of athletes who are improving their times.

Coach Beth Brant returns at the helm for the Cavs once again, and Brant is excited about what she has returned as well as the new swimmers she has.

The first few meets of the season have come against bigger schools. The bigger schools in the Southeastern District have year-round swimmers who swim for national teams and compete in national competitions. Because the Cavs team is much smaller in size this season, they have not entirely been able to fill all of the events. Also, because Lakeland does not compete with Southeastern District teams in the regional or state meets, they continue to just focus on improving their times.

The season goal for Lakeland’s swimmers is to continue to decrease their times for the season. Brant wants her team to look at their times and try to beat their best times by swimming with better technique and speed.

“We focus on times more than regular season team scores because personal times are something you can consistently measure progress by,” Brant said. ​

On the boys’ side, Lakeland returns six swimmers, but all of them have a strong competitive drive. Corey Hasson, Colton Brown and Cole Matern are three returners that went to states last year on the relay team. Chandler Sessoms, Cody Anderson, Josh Bennett and Ryan Wright are also productive returners for the Cavs this season.

Sarah Stansick, Darcy Kilgore and Autumn Thompson return as productive swimmers for the girls’ team. Kyleigh Hasson, Myasia Pareno and Louise Murray are three swimmers that were new to competitive swimming last year and have and have increased their techniques and speed.

Lakeland will get back in action after the break on Jan. 6 against Oscar Smith High School.

Briana Autrey was voted the Suffolk News-Herald Player of the Week after her 27-point performance against Indian River High School.... read more