A Suffolk mother will soon undergo a procedure to help her overcome an ongoing battle that’s lasted more than a decade.

Kim Taylor was diagnosed with vasculitis in 2006 at Sentara Leigh Hospital in Norfolk after months of joint pain, purple dots on her legs and other symptoms that indicated an inflammation of her blood vessels. This inflammation causes blood vessel walls to narrow or weaken, which results in blockages and damage to tissue and organs.

Taylor’s vasculitis is specifically called granulomatosis with polyangiitis, formerly known as Wegener’s Granulomatosis. A patient’s respiratory system — such as sinuses, throat and lungs — is usually affected first, and potentially fatal organ damage can occur throughout the body.

Fatigue, shortness of breath, sinus infections and coughing up blood are among the symptoms. 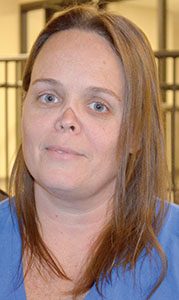 “I’m not as active as I used to be,” Taylor said. “I can’t be, really, when just walking up those steps kind of makes you winded just a little bit.”

Another major complication results from a hole in the nasal septum, the cartilage that divides the nostrils.

“One of the effects of this form (of vasculitis) is your sinus involvement,” Taylor said. “With that, I have the beautiful saddle nose.”

“My sinus cavities were completely filled with crud, and it bore a hole in the cartilage. There’s nothing there to support it, which is what caused the saddling.”

Taylor had to wait years to be in remission long enough for nasal reconstruction to be possible.

She has been in remission since her last RITUXIN Infusion in May 2016, when Dr. Jane Derrig — her rheumatologist at Lakeview Medical Center since 2008 — began to once again treat Taylor with pills after she had an adverse reaction to her last infusion, she said.

Plastic surgeon Dr. Eric Dobratz will perform the six-hour procedure on Jan. 10 at Sentara Norfolk General Hospital, which will be followed by further surgery and outpatient care.

“He said it will be an obvious difference right away,” she said.

Despite years of pain and discomfort, Taylor has remained steadfast and active. She stays busy working in the infant room at First Baptist Weekday School on North Main Street.

In November, she and her mother, Thelma Lane, traveled to Carver Mountain Orchard in Charlottesville, along with the Peaks of Otter in Bedford County.

“I just kind of feel more at peace, whether it’s at the beach or in the mountains,” she said.

She worships at River of Life Baptist Church in Franklin with her husband, Brian, and their 8-year-old daughter, Reagan. She considers her daughter a miracle child for being born both two weeks before the death of her father, Herbert Lane, and in spite of potential medical complications due to her vasculitis, she said.

“She doesn’t want me to have the surgery, because she likes me just the way I am,” Taylor said.