Christian Manley has wanted to be a musician since his days at John F. Kennedy Middle School. He played several instruments before focusing on his skills with a saxophone.

“I originally started on trumpet, but my mother told me she didn’t want me playing a brass instrument because brass players sometimes get like a lump on their lip,” Manley laughed. “I took that into consideration. I didn’t want messed-up lips.”

The Suffolk native and Lakeland High School alumnus attended the Governor’s School for the Arts in Norfolk. He then studied at North Carolina Central University, where he eventually earned a master’s degree in jazz studies.

For him, music is about controlling the instrument to have it “speak” his skills. 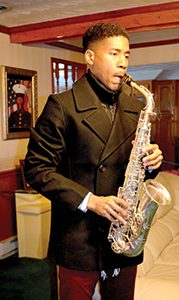 Lance Cpl. Christian Manley, 25, of the United States Marine Music Program plays a tune on his saxophone. Manley is an alumnus of Lakeland High School.

“What the instrument is capable of doing is pretty amazing,” he said. “It can do a lot of things, and the only limitation is whoever is playing it.”

Now, that young man who started playing in middle school is 25 years old and has become a U.S. Marine. He’s now a member of the Marine Music Program.

Manley didn’t enlist in the Marines just for music. He also wanted to become a capable adult.

“I wanted to be a better man,” he said. “I wanted to be in a position where I could be a good husband and a good father in the years to come, and in order to do that, I needed to put myself in a more stressful environment so that I may be tested.”

He said the most difficult test for him was learning how to swim. He wasn’t raised around pools or at the beach, he said, and simply didn’t learn. Recruits that can’t swim have less than a week to learn, or their training is pushed back.

“The impression I got from recruiters was that I would learn how to swim there, but I was not prepared at all for the manner in which it would be done,” he said.  “Drill instructors and swim instructors yelling at you, guys getting thrown out of the pool and failing every 30 seconds.”

Manley and his fellow recruits started on a Monday morning in March, the fourth week of basic training. They swam 25 meters in shallow water, were pushed off a diving board to swim from the deep end, tread water four minutes at a time and swam with hiking packs and gear.

If you failed in the morning, you came back in the afternoon, and did that daily until you passed.

Recruits qualified, and the number of them kept shrinking as Manley failed four times. He ended up qualifying on his fifth attempt.

“It was a great feeling,” he said. “It was at that point that I knew the rest was going to be just fine.”

Manley graduated in the top five percent of his platoon, he said. The final phase of his training took place at the Naval School of Music in Virginia Beach. He was promoted to lance corporal in October and then was named December Student of the Month before graduating on Dec. 15.

On Thursday, he reported to his new duty at Cherry Point Marine Corps Air Station in Havelock, N.C. He’s excited to improve his skills and secure himself financially.

“I’m taking this opportunity to better my musicianship, gain more experience with handling responsibility and being accountable for myself and others,” he said. “The goal for me has always been about the music, but with the Marines, it will enable me to do that, and become a better man, without having to struggle with money.”

But his goal is still to be a top jazz musician.

“That’s been the goal ever since I heard John Coltrane for the first time,” he said.

Lovers of nature will have an opportunity to receive education and give back to the environment next year with the... read more