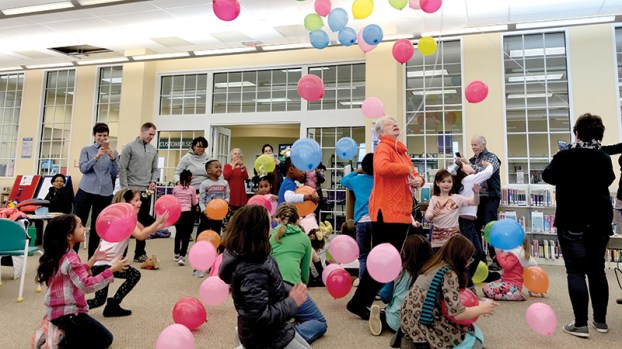 Kids celebrate the stroke of noon on Saturday at the Noon Year’s Eve party at the North Suffolk Public Library.

Kids danced under a balloon drop as the clock hit noon at two of the city’s library branches on Saturday.

The Noon Year’s Eve party is an annual bash hosted by the North Suffolk and Morgan Memorial libraries, and this was the third year for the event. The party caters to young children in the area, because children usually aren’t able to stay up until midnight on New Year’s Eve.

“New Year’s Eve is the best time to celebrate and ring in a new year, but kids don’t get to do it because they’re normally in bed,” said Shawna LoMonaco, library services coordinator.

The party included two craft stations where the children could make a firework painting and decorate a cup hat for the celebration. The library also provided snacks for the children while they waited for the countdown to begin.

Nearly 65 residents in the community attended the event this year, almost filling the children’s section of the library.

“I think it brings family together for reflecting and bringing in a new year. It’s important to build those relationships,” LoMonaco said.

Most of the participants are regulars at the North Suffolk Library, and that’s how they became aware of the event.

“We come to the library every week for toddler time. This is our first Noon Year’s Eve,” said Suffolk resident Ashley Miller.

As soon as noon hit, the library staff executed the balloon drop for the kids, and the room broke out into a dance party.

“This is my third year, and I still worry that the whole bag is going to come down,” LoMonaco said.

It was a time of reflection and thinking about what everyone wanted to see happen in Suffolk in the new year. Most families and staff agreed that they wanted to see the community coming together in more ways.

“I would love to see more activities in the parks. More things to bring people together,” Miller said.

Fire and related death under investigation

Firefighters found an elderly man dead when they responded to a fire at his Holland-area home early Friday. Ralph Saunders,... read more