Harris was asked in June to be the main attraction at the art show, where she will display about 50 to 60 original paintings. Most of the artwork has come from work done in the last six months.

“I don’t call it stressful, but it gave me an excuse to paint. It made me set aside time to paint,” Harris said.

Most of Harris’ paintings take her just a few hours at a time. The oil painting Harris donated to NSA only took her two hours to complete. 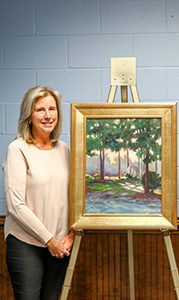 Barbara Harris stands with her painting “Morning Glow.” The painting was given as a donation to Nansemond-Suffolk Academy.

“It’s better if I do them quickly. The hardest thing is learning to stop,” Harris said.

Harris is a nurse full-time at Sentara Port Warwick Wound Clinic, and she finds the time to paint around her work schedule.

“I tried to paint as much as I could in the last six months,” Harris said. “My husband understands when the attention gets taken away from him.”

Both her husband and son have been incredibly supportive of her painting throughout the years, Harris said.

Harris finds the time to paint with her studio being in her own home. The garage attached to the house has now been converted into her studio. She works in her studio using photos she has taken or live set ups.

“The studio is in my house. That’s what helps me paint all the time,” Harris said.

Despite her busy schedule with a full-time job and painting, Harris finds time to have painting lessons at her house and attend workshops to learn from other artists.

“I love to do workshops. I thrive on it,” Harris said.

Harris hopes to retire within a few years and dedicate her time to painting.

“That time is coming. I’ll probably retire in the next two years,” Harris said.

More than 200 artists will have work showcased at the event, which is the largest show that has been seen at NSA. There will be more than 100 volunteers to assist in unloading and hanging the artwork around the Lower School.

The opening ceremony for the NSA Art Show will be held from 10 a.m. to 4 p.m. Jan. 27 in the Main Campus Lower School Lobby. The show and sale will continue until Feb. 4.

Question: How are you preparing for snow this week?

David Harris, 62, Suffolk The only thing I’m going to do is stay in the house where it’s nice and... read more