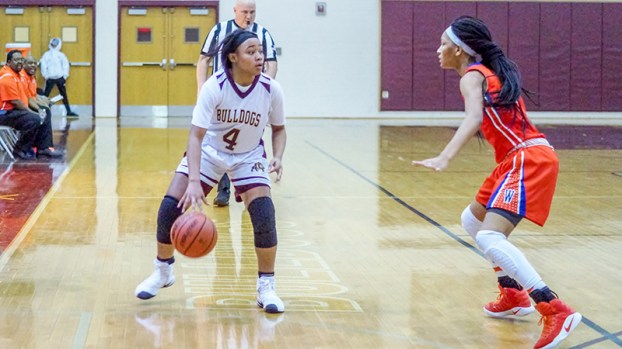 The Lady Bulldogs are 7-0 so far this season despite a different look. Caroline LaMagna Photo

The Lady Bulldogs are undefeated through the season at the moment. They have returning players in Nylah Young and Camary Harris, but they have lost seniors such as Amesha Miller, Cydney Nichols and others who contributed to a state championship runner-up team.

Coach Maurice Fofana knew there was no replacing those players, but instead the team as a whole is looking to make up for that production.

This year’s team is different in many ways, and Fofana believes the team has not entirely secured its own identity yet. But because of the talent King’s Fork has, they have been able to win games without having one so far.

The Lady Bulldogs approached the holiday break a little different this time around. For the first time in five years, they did not compete in any sort of holiday tournament. However, Fofana believes that the team got some good stuff in over the break, such as working on getting closer to that identity.

“What we did this year was a bit different, but it was well needed,” Fofana said. “We had some players that had not got much time this season. So, we just wanted to get in the gym and kind of tie up some loose ends as we go into this last part of the season.”

January will feature mostly district games with some non-conference exhibition matches sprinkled in for the Lady Bulldogs. Fofana wants his team to go through a strong month and look back at how much they have improved since November.

“Be better than what you started is what we always talk about,” Fofana said. “Whether it is practice or a game. Look back and say, ‘Did I get better in these two or three hours?’ Get better at something every day.”

Young leads the team in scoring to this point in the season, with Harris close behind. Brianna Copeland and Neecole Brown also add productive dynamics to the puzzle, as does Lydia Goolsby. Fofana described Young as a distinct talent that can score in many ways and is an exciting player too. Harris, a Bethune-Cookman University signee, is a true point guard who is always looking to get everyone else involved. She and Young work well off of each other.

King’s Fork will get back to district play possibly on Friday against Great Bridge High School, if the weather permits.

With the weather postponing a lot of activities, the Saints hope to stay ready for the rest of their season.... read more