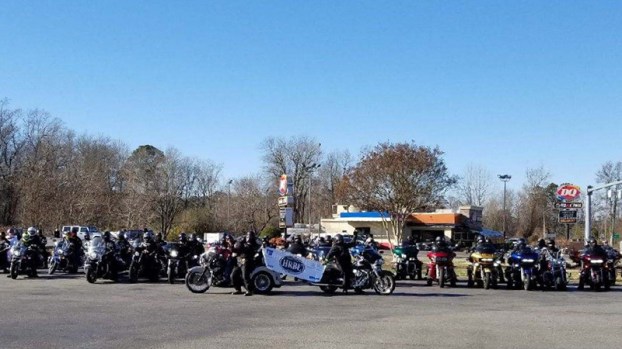 Riders in the Frosty Balls New Year's Ride prepare to set off on the course on New Year's Day.

Riders get frigid for fundraising

After the coldest New Year’s Eve in Hampton Roads in 100 years, riders got on their motorcycles the following Monday morning to embrace the cold, raise money and remember fallen friends.

“It was probably the smoothest ride I ever had on the coldest day,” Moore said. “It was awesome.”

Moore led the riders on a 13-mile route from the Burger King on West Windsor Boulevard to the McDonald’s on South Church Street in Smithfield.

Moore chose the two restaurants because he wanted to show appreciation for the job opportunities such places provide for young people. When he asked his fellow riders how many had worked in fast food, nine of them raised their hands, he said.

He also wanted to surprise Burger King manager Crystal Girshka-Peterson, who had helped his son through some rough times in his childhood, he said.

Riders prayed together that morning for those that have died in motorcycle accidents, including 30 Hampton Roads riders in 2017, according to Moore.

He said some people had approached him and his fellow riders during the event to thank them for this community service.

“Everybody kind of looks at us like we’re these stereotypes of bikers,” he said. “We definitely showed the whole community that we don’t fit that stereotype.”

Winter Storm Grayson brought a blizzard to Suffolk Wednesday and Thursday, and the snow is expected to stick around for... read more