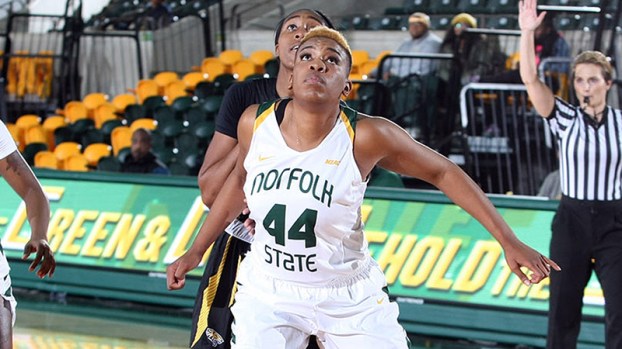 Khadedra Croker has made her mark in her first year on the court for Norfolk State University.

Former King’s Fork High School standout Croker has been doing good things on the court in Norfolk. The redshirt junior has already been awarded two conference Defensive Player of the Week awards.

The schedule will soon start ramping up for conference games for NSU, as they sit with an 8-5 record. Croker feels good so far about what has transpired in the season as a team as well as individually.

“I feel good about what we have going on so far,” she said. “Of course, some things could have been better, but I am happy with what we have done. We have broken a couple of records. As far as my game goes, I feel like I have been playing well so far, and I’m looking to carrying that over into conference play and just improving.”

Croker takes pride in her defensive effort. She knows it plays a role in what is asked of her, and it helps her team win games. The former Lady Bulldog also wants to break the school record for the highest blocks in a game.

After her stellar career at King’s Fork, Croker had committed to play her college basketball at Virginia Tech. In her short stint there, she didn’t play much, which led to her transferring close to home and attending NSU. She felt like the NSU coaching staff was going to give her an opportunity to show what she can do. After having to sit out last year due to NCAA transfer rules, Croker is now a big part of what NSU does on the floor.

“I transitioned from not playing as much to playing a lot more,” Croker said. “At NSU, my coaches and teammates believed in me and had confidence that I could get it done. So, going from not getting an opportunity to getting one was very fortunate. I really appreciate the NSU program for it.”

Last year, when Croker had to sit out, she worked on multiple things. She was specifically working on her right hand, jump shot and learning more moves in the post area. Croker wants to be a versatile post player who can do things inside and outside.

One thing that sits in the back of Croker’s mind is possibly being selected as the Mid-Eastern Athletic Conference Defensive Player of the Year. She is always improving in her game, so she hopes that maybe at the end of the year she could earn that accolade. She currently has a team-high 42 blocks and averages 3.2 blocks per game and is second in rebounds with a 4.3 average. They have already set certain records with the lowest field goal percentage allowed to an opponent. In a win against the College of William & Mary, they allowed the fifth-lowest total of points in a game in school history with 27.

If she keeps up her current defensive pace, it is possible Croker can add more accolades by season’s end.

After winning the 3A indoor regional championship last year, the Cavaliers track and field team is hoping for continued success.... read more