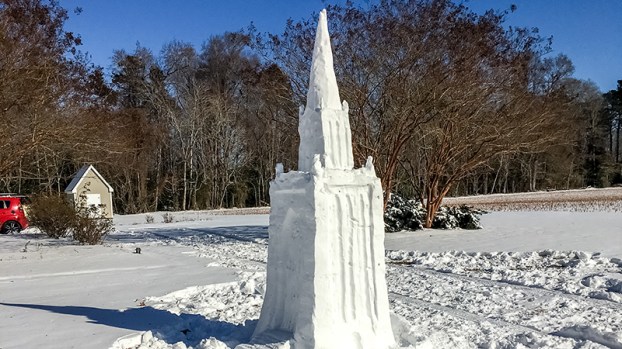 Sean Bilby spent his Thursday crafting an 11-foot-high snow tower in his yard.

Most Suffolk residents spent their Thursday making snow angels, sliding down slopes and taking videos of their dogs frolicking in the white powder. Sean Bilby, however, took advantage of the weather for his own creative enterprise.

The 46-year-old Suffolk resident spent four hours on Thursday making an 11-foot, freestanding bell tower dubbed the “Ryton Campanile.” The latter word of the phrase refers to the bell towers typically associated with Italian architecture, while the former refers to the residence he shares with his wife, Dana Bilby, and their two daughters. 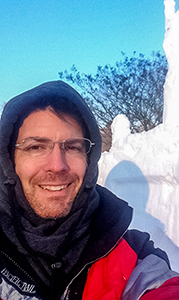 “The hamlet of Bilby in Nottinghamshire in England is on the river Ryton,” he said to explain how they named their family home.

He also programs the electronic carillon bells at Suffolk Christian Church and plays tin bells at Freemason Baptist Street Church in Norfolk, which is why he wanted to work in a bell theme, he said.

He started stacking storage tubs of snow at 11 a.m. on Thursday before the snow stopped falling, eventually using a ladder to top off his creation, he said.

“I was concerned it might be too dry, but it actually packed pretty well,” he said.

Then he grabbed whatever he could find in the garage — “literally scrap pieces of wood and a trowel,” he said — to carve out the details.

The structure held, and Bilby even lit candles around his tower after the sun went down.

“It looks great, and it held up pretty well,” he said. “I’ve made some before that collapsed while I went inside for lunch. One time I was trying to make a pavilion with four columns, and that was too adventuresome.”

Winter Storm Grayson brought a blizzard to Suffolk Wednesday and Thursday, and the snow is expected to stick around for... read more