Kayla Barnes was voted Suffolk News-Herald Player of the Week after some impressive performances in the Boo Williams Holiday Tournament.

Barnes, now a senior at Lakeland High School, has been pushing limits this season. Even though the Lady Cavs haven’t had relative success in the win-loss column, Barnes has certainly been a bright spot for them. The senior has been the leading scorer for the Lady Cavs the past two seasons and has been enjoying her senior year journey.

“This season has been going well for me, because this is my last year,” she said. “I’m giving it my all.”

Lakeland played in three games last weekend for a holiday tournament, and Barnes did what she does. In their first game of the tournament she scored 25 points and in the last two games she also scored in double digits for the Lady Cavs. Sometimes, Barnes can be her own biggest critic. Even though statistically she played well for her team, she felt like she could have done better. 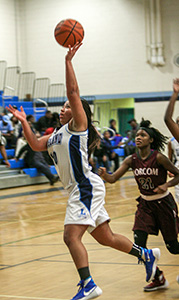 Kayla Barnes plays for the Lakeland High School Lady Cavaliers in a game against I.C. Norcom High School last year. Barnes is this week’s Player of the Week after an impressive tournament performance.

“Playing in the Christmas tournament was a good experience for myself and for the team,” she said. “I felt like I did what I had to do, but at the same time, I could’ve done better. I can say that I trusted my teammates a lot more to make plays out there.”

Barnes has been known to have a scorching game or two. Over the years, she has had numerous 20-plus point games, which was evident last week. Last season, she scored a career high of 40 points in a game. When Barnes is in the zone, she believes no one can stop her, but she also listens to her coaches so she can take advantage of their expertise.

Her goals for this season were just to come in and help her teammates get better, as well as her personal improvement. Barnes is closing in on 1,000 career points, which will be a significant accomplishment she is looking forward to. It has been something she has wanted to achieve since she was a freshman and is hoping it leads to some more attention from colleges. Achieving 1,000 will be especially impressive for someone who normally draws double- and sometimes even triple-teams throughout games.

“I know that other people are watching,” she said. “I want to motivate my teammates and the JV team as much as I can.”

When Barnes is out on the court, she is inspired by family. She has two younger cousins, Keimari Artis and Keonte Cobb, who play for the varsity boys’ basketball team. Her former coach, Brandey Blunt, is someone that motivates her as well. Blunt encourages Barnes always to show her full potential during adverse times.

A dream for Barnes is to play college basketball. She has been hearing from coaches from NCAA Division II schools and hopes in the near future she can commit to a school. Barnes and Lakeland will be in action Tuesday against Indian River High School.