Trevor Lucas has worked hard his entire time in Hampton Roads to give the community a better chance at life, and for that work he is now set to be honored with the Community Leadership Award.

Lucas will be presented the award from the S. Delois Mayes Scholarship Foundation at its fourth annual Martin Luther King Jr. Day Benefit Brunch next week.

Lucas, originally from Louisiana, was brought to Hampton Roads in 1997 after he joined the Navy as a boatswain’s mate.

“I was in the Navy for three years. I had a rough childhood, and getting into the Navy taught me how to be a man,” Lucas said. “It helped me grow up.” 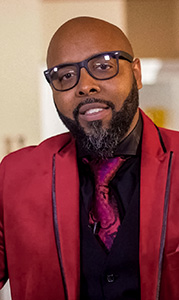 Once Lucas settled down in the area, he began to sell his artwork, and that business transformed into him selling T-shirts to the community. Custom T-shirts became a big source of business for him, and he found himself making a lot of T-shirts for those that had died in the community.

“When people would get shot, I was making “rest in peace” shirts,” Lucas said. “I was putting kids from 14 to 25 on T-shirts all year long. That’s what got me thinking about what was wrong out here. It made me more concerned about the well-being of the community.”

Fashion became a way for Lucas to bring positivity and change to his community, and he would make T-shirts with positive affirmations for kids. After time passed, Lucas found himself tired of the superficial aspect of fashion.

The next project Lucas found himself involved in was an online television show called the VAdio Show. The ‘VA’ represents Virginia, and it also stands for visual activist. The show deals with issues that the community is dealing with and how to combat them.

“If you watch TV and see social media, there is a lot of foolishness and ignorance. Kids get their perception of cool from the media, and I was finding there wasn’t a balance of what’s good and bad. We are influenced by these people, and if they’re being cool and disrespecting women and selling drugs, people will mimic that,” Lucas said.

The episodes of the show are directed at problems they find in the community. Some of the topics have included financially responsibility, drug abuse and race relations.

“Anything we deem a problem in the community, we do an episode on,” Lucas said. “We film the whole process, not because we want a pat on the back, but because we want to. I want to be able to show people something different than they’ve been seeing from the media.”

Lucas plans on continuing to use a visual medium to spread a positive message to the Hampton Roads community.

The scholarship foundation’s brunch will take place at 10 a.m. Jan. 15 at the Hilton Garden Inn Harbour View, 5921 Harbour View Blvd. The Hon. Karen Ackerson Gauff, a judge in the Los Angeles Superior Court, will be the guest speaker.

A new session for General Assembly

The Virginia General Assembly will convene on Jan. 10 for a 60-day session in Richmond. While bringing in a new... read more