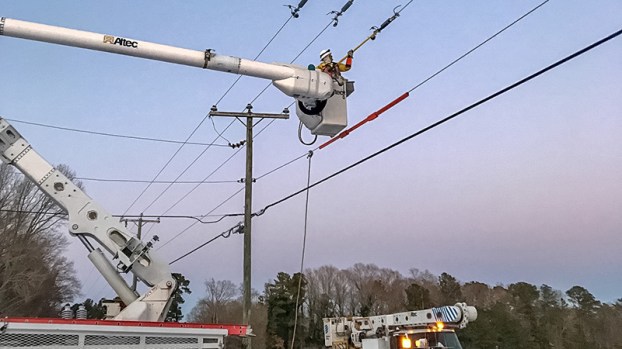 Lineman Daren Parker restores power for Dominion Energy in Smithfield after the blizzard that struck Hampton Roads earlier this week. More than 90,000 Dominion customers were out of power at one point or another during and after the storm. Courtesy of Dominion Energy

Snow no problem for Dominion

Winter Storm Grayson caused a loss of power for 90,000 Dominion Energy customers in areas of Virginia and North Carolina, but the company had restored the vast majority of them by 12 hours after the storm ended, the company said.

High winds of almost 60 miles per hour knocked down trees and tree limbs, which pulled down power lines, producing the main cause of power outages, according to Bonita Billingsley Harris, spokeswoman for Dominion Energy.

Snow- and ice-covered roads impeded travel to some areas that needed power lines fixed. There were crews at 550 separate locations that required damage to be fixed, and the crews worked around the clock to restore power as soon as possible, Harris stated.

“With the exception of Virginia Beach and hard-to-access areas of the Outer Banks, Dominion Energy crews restored power to all customers back by 11 p.m. Thursday night, with the rest of our customers back on by 5 p.m. Friday,” Harris said in an email.

The cities of Virginia Beach, Chesapeake, Norfolk and parts of North Carolina were the most affected areas during the storm. About 80,000 customers were affected in those three cities, including 16,000 in North Carolina.

In Suffolk, only about 20 customers were affected, since the city suffered lower winds than areas closer to the coast, according to Harris.

The highest priority was given to hospitals, emergency 911 call centers, municipal water pumping stations and other public safety facilities. By Thursday afternoon, 90 percent of those facilities had regained power.

Most Suffolk residents spent their Thursday making snow angels, sliding down slopes and taking videos of their dogs frolicking in... read more