A Suffolk man who died recently was memorialized by his alma mater.

A native of Isle of Wight County, Turner earned his bachelor’s degree in agricultural engineering. He started his career with Newport News Shipbuilding in 1957. Over the next 43 years, he held positions of increasing responsibility at that company, Westinghouse and General Dynamics, from which he retired as president and chief operating officer in 2000.

In 1998, Turner was elected to the National Academy of Engineering, which honored him for “leading the implementation of innovative engineering and design processes and establishing a new standard for naval ship design and acquisition.” 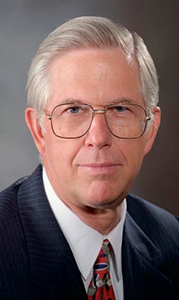 The following year, he received the Fleet Admiral Chester W. Nimitz Award from the Navy League of the United States, which honors industry leaders who have made major contributions to U.S. maritime strength.

Turner was active as a student at Virginia Tech. He spent two years in the Corps of Cadets, played football and was a member of the Tau Beta Pi and Phi Kappa Phi honor fraternities. He continued to maintain a close relationship with his alma mater throughout the years, serving on the Academy of Engineering Excellence, the Virginia Tech Foundation Board of Directors, the College of Engineering Committee of 100, and the university’s Board of Visitors.

Along with his wife, Elizabeth, Turner was a charter member of the President’s Circle within the Ut Prosim Society of Virginia Tech’s most generous donors.

In recognition of his accomplishments, service and contributions, the university in 1994 presented Turner with the University Distinguished Achievement Award. He received the Alumni Distinguished Service Award in 2003, and the university’s highest award, the William H. Ruffner Medal, in 2004.

“He was a very smart guy, but down to earth,” said O.A. Spady, a 1957 Tech graduate who met Turner in high school and remained in touch over the decades. “He loved Tech, like so many of us do, and was fortunate enough to be in a position to help it.”

“Jim was a great person and a valued friend,” said John R. Lawson II, who graduated in 1975 and who like Turner has served on the Board of Visitors and been rector. “He was a giant of industry and all things Virginia Tech. What a fine example of how a gentleman should live his life. We will miss him.”

Turner’s dedication to Virginia Tech was matched by his dedication to his profession. He was a member of the Society of Naval Architects and Marine Engineers, the American Society of Naval Engineers, the American Defense and Preparedness Association, the Navy League of the United States, and the Naval Submarine League, which awarded him the Naval Submarine League Distinguished Civilian Award in 2002.

Most Suffolk residents spent their Thursday making snow angels, sliding down slopes and taking videos of their dogs frolicking in... read more