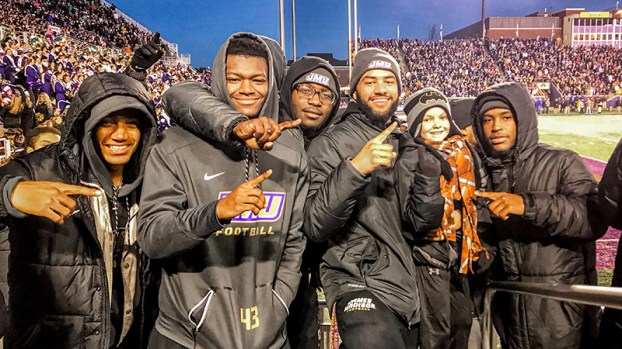 KeShaun Moore, third from right, pauses for a photo with young fans along with some of his teammates. Moore was a part of National Championship runner-up team James Madison University.

“It was a great learning experience,” he said. “I am blessed to have the teammates and coaching staff that I have. They made it a season I will never forget.”

Going through the preparation for the game and the nuances, Moore felt like reaching the championship game gave him a taste of what he wants to accomplish in the future.

“I took everything in, and it was a memorable time, but now it is time to work towards getting back,” Moore said.

Overall, Moore felt like his freshman season, in general, was a great learning experience. A lot of his older teammates embraced him and talked to him about how to handle things on the field and off of the field. He bonded with his teammates over everyday things like practice and study hall.

For many, college is a big adjustment, whether a student-athlete or not. Over the summer Moore was able to get acclimated at JMU, which helped his transition into the fall. On the field, Moore felt like his biggest challenge was learning the playbook.

“My transition on the field getting used to speed wasn’t too hard,” he said. “The playbook is the hardest part, because it is all new plays with more signals and calls. However, once you get the playbook down, then you can play comfortably and perform better.”

Moore redshirted his first season. He was able to take in and learn things that will help him going forward. Over the summer, he wants to work on his speed, quickness and flexibility.

“It all helped me get acclimated to the speed and physicality I need to play at this level,” he said. “It also helped me with time management so in the future I know how to balance football and schoolwork and perform at a high level in both.”

As for next season, Moore said he can see himself getting time on the field. A lot of his production will have to come on special teams, but he is willing to do that to work himself into the linebacker rotation as he continues to grow.

In his last season for Nansemond-Suffolk Academy, Moore was named the Tidewater Conference of Independent Schools Player of the Year. He was also an all-conference and all-state player. He was a part of an NSA team that won a state championship in 2015.

Former Nansemond-Suffolk Academy standout Cole Christiansen was happy with his sophomore season at Army. Christiansen is a couple of weeks... read more