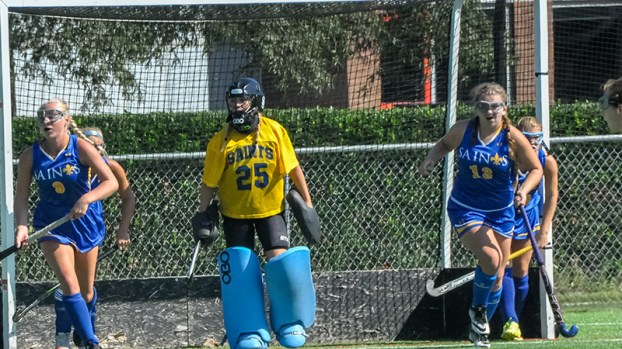 Sarah Christiansen, pictured at goalie, recently became the third Christiansen sibling to make an all-state team. She, her brother, Cole, and sister, Paige, each achieved the honor. Lisa Meyers Photo

The Christiansen siblings all have been standouts in many ways in their time at Nansemond-Suffolk Academy. One incredibly neat thing the siblings — Paige, Cole and Sarah — have accomplished is that they have all made an all-state team.

Cole achieved it first becoming an all-state football player as well as Defensive Player of the Year for the Virginia Independent Schools Athletic Association. He graduated in 2016 and is a linebacker for Army. Paige became an all-state field hockey player in the fall of 2016 before she graduated in 2017, and Sarah recently made the all-state team for field hockey in the fall of 2017. Sarah still attends NSA.

As a family, that collection of accolades is very impressive and something each sibling is thankful for. They cheer each other on, and their family members are their biggest fans.

“Our parents are our ultimate fans,” Sarah said. “My grandparents watch every game that they can. My grandpa even makes signs for our field hockey games. We are a very athletic family, so sports are naturally huge part of our lives, but it makes it even more fun when your family members are out on the field.”

Even though Sarah was last in line to achieve the all-state accolade, she didn’t feel any pressure to do it. Instead, it was exciting to know she had the potential to do and what it would mean to have all of them make all-state. Paige has seen her sister improve over the year and felt like she was due to be recognized.

As the older brother, Cole is proud of what his sisters have accomplished even more than his own individual accomplishments. It was never a goal for each of the siblings to make all-state but rather for each of them to do the best they could at whatever they competed in.

“I think it’s awesome we made all-state,” Cole said. “Both of my sisters work super hard, and I’m so proud to be their brother.”

“Each one of us just wants to try our hardest to be the best we can be in the sports we play,” Sarah said. “We have always found it important to do things like work in the offseason of our sports whether it was going to clinics or playing in club leagues. We are very competitive, so that pushes us as hard as we can in whatever we do.”

The Christiansen siblings are very happy for one another and have left a legacy at NSA they can talk about for years to come.