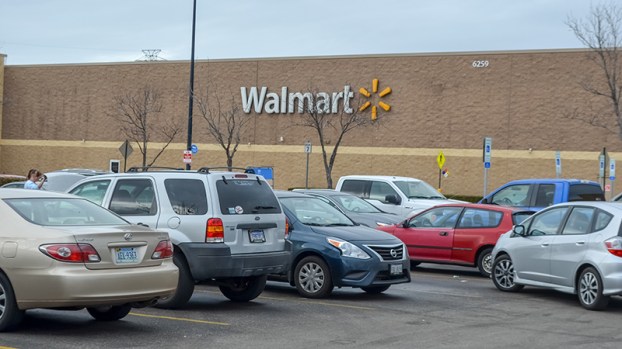 Cars move in and out of the parking lot on Thursday at the Walmart Supercenter on College Drive.

Walmart employees across the country will receive more pay and benefits starting this February, but some shoppers in Suffolk believe that’s still not enough for the hard work done at their local supercenters.

On Thursday, Walmart announced plans to increase the starting wage rate for all hourly associates in the United States to $11, which will go into effect this February pay cycle, according to a company press release. Hourly workers currently earn a minimum wage of $9 an hour, or $10 an hour after finishing a training program.

Hourly associates will also receive 10 weeks of paid maternity leave and six weeks of paid parental leave, according to the release. The company’s adoption benefit for both full-time hourly and salaried associates will provide up to $5,000 per child for expenses such as adoption agency fees, translation fees and legal or court costs.

Furthermore, Walmart will grant one-time cash bonuses of up to $1,000 to eligible associates based on their lengths of service, per the release.

“Today, we are building on investments we’ve been making in associates, in their wages and skills development,” Walmart President and Chief Executive Officer Doug McMillon stated in the release. “It’s our people who make the difference, and we appreciate how they work hard to make every day easier for busy families.”

Customers at the Walmart Supercenter on College Drive supported the move to improve the pay of these employees.

“I think it’s a good idea,” said Jill Taylor, adding that she believes minimum wage should go up for hourly associates across the country, not just at Walmart. The federal minimum wage is $7.25 an hour, although some municipalities and companies have raised it.

Elvis Wright, 61, and his mother, Claudia Diggs, consider themselves regulars at the College Drive Walmart and had plenty of praise to give.

“They’re real nice to the customers, and that’s what it’s all about: the customer care,” Wright said.

“This is my store,” Diggs added. “I love to come here, shop and do whatever.”

They agreed that while $11 is an improvement, it’s still not enough to live comfortably.

But how much would be considered “enough?”

“Someone older is going to have medicines, or maybe children,” Culpepper said. “I think those things should be taken into account when people are getting paid.”

Suffolk Fire and Rescue crews responded on Thursday afternoon to a report of a possible residential structure fire in the... read more