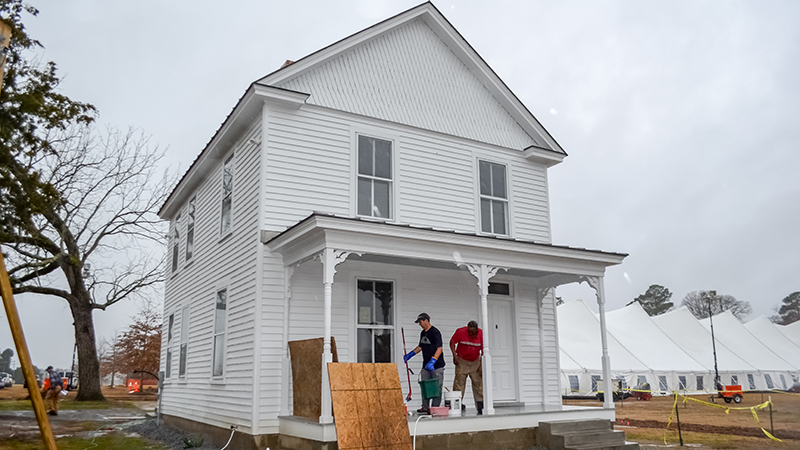 Contractors work on the historic caretaker’s residence at Windsor Castle Park in Smithfield during the Friday morning rain.

A vacant, decrepit residence at a historic park on Smithfield has a new lease on life.

Contractors finished restoration work on the two-story caretaker’s residence at Windsor Castle Park on Friday, according to project manager Rick Bodson. The restoration is part of a $5 million project to renovate the 208-acre riverside park for festivals, weddings and other occasions.

The caretaker’s residence dates back to the 1920s and was left vacant and vulnerable to the elements for decades, Bodson said. Asbestos-laden plaster covered the walls, and rotted wood crippled the floors. Exposed roofing and years of rainfall led to further deterioration inside.

“It was a major eyesore on this property, which is why it was one of the first things we tackled,” Bodson said. 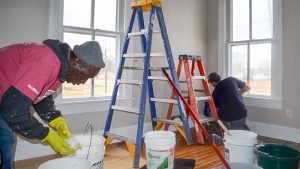 Contractors Marshall Johnson and Jeremiah Burke on the interior of the historic caretaker’s residence at Windsor Castle Park in Smithfield during the Friday morning rain.

Drywall was installed and painted while most of the original wooden floors were refurbished and preserved. Most of the windows were beyond repair and needed to be replaced, Bodson said. Modern amenities were added to the kitchen, and a new bathroom was installed upstairs.

Going up the stairs reveals a new window of tinted, colored glass made by site superintendent Roger Ealy. He said he used the remaining half of the original window in the frame as a reference point.

“We got fairly close to what was there before, I think,” he said.

Bodson said the restorations were accelerated by funding through Smithfield VA Events, a nonprofit organization that leases land at the park for three annual fundraising events. The organization will use the residence for storage and office space, with rooms on the first floor ready for training and meetings, Bodson said.

The organization is also funding restoration of two barns that are expected to be finished in late spring to early summer, Bodson said. Outbuildings such as the smokehouse, two granaries, stables and log corncrib are about 90-percent restored as of Friday.

The park was originally part of the 1,450 acres of land owned in 1637 by Arthur Smith. In 1752, Smithfield was established with a portion of the property granted by Arthur Smith IV.

The 208-acre park was gifted to the town in 2010 by Joseph Luter III, former chief executive officer of Smithfield Foods. The Windsor Park Castle Park Foundation has been restoring the historical buildings to satisfy Virginia Department of Historic Resources mandates.

The site is already popular for weddings and photography, in addition to the four-and-a-half-mile hiking trail, fishing pier, dog park and other attractions.

On Saturday, thousands of visitors will enjoy Bloody Marys, oysters, Brunswick stew and barbecue at Bob Fest, one of the three events Smithfield VA Events holds at the park, not to mention those sprinting in the 8K Chilly BOB Roadrace Challenge.

“It’s a destination for a lot of people,” Williams said.