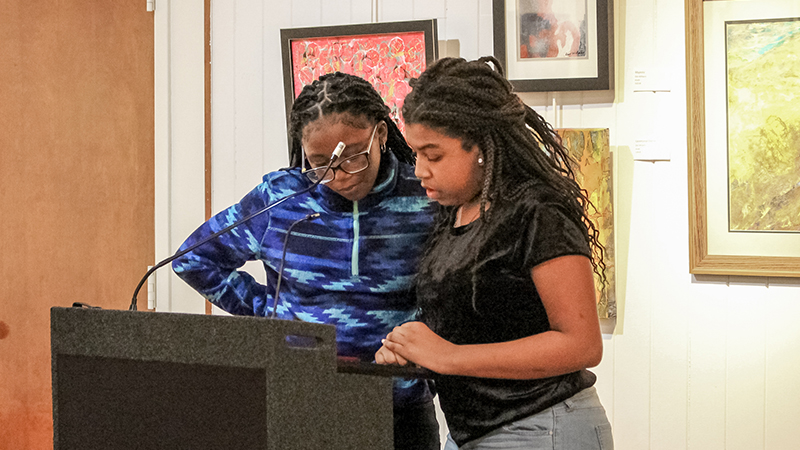 Words of poetry and prose flowed from the microphone at the Suffolk Art Gallery on Thursday in between bites of pizza and neighbors getting to know one another.

The Suffolk Art League hosts its Poetry, Prose and Pizza open-mic night quarterly throughout the year. The event is an open invitation for writers and poets to step up to a microphone and share words, whether it is their own work or just a piece that they felt compelled to recite.

“We want to promote all forms of art, and this gives our authors the opportunity to share their works,” said Suffolk Art League Executive Director Linda Bunch.

About 12 guests were at the latest open mic night on Thursday. The events are hosted by Nathan Richardson, an accomplished poet and published author who is also an advertising representative for the Suffolk News-Herald.

Richardson said the family-friendly atmosphere of the event is a great opportunity for aspiring authors of all ages to practice and improve their craft.

“It takes a lot of courage to get up in front of an audience, but that’s a big step to becoming an author,” he said.

Richardson recited several of his original works, such as his short poems “Praise for the Trashman” and “Snowball’s Chance.” After that, other guests overcame their nerves and took turns stepping up to the microphone.

Terricita Copeland read the writings of her daughter, Tamia Copeland, a junior at Old Dominion University. Her daughter was not at the session, but that did not diminish Copeland’s enthusiasm for putting her daughter in the spotlight.

She was at the event with her friend, Sylvia Bond, a retired Suffolk Public Schools teacher who read her own works that will be published in her forthcoming collection called “Verses from the Heart.”

She’s been writing since she was 6 years old, and even after teaching for more than 30 years, she still enjoys getting up in front of the crowd.

“I just look at it as connecting with them,” she said.

Bond’s granddaughter, Ramiyah Walton, 11, was at the event as well with her friend, Tyonna White, 12. Both of them are sixth-graders at John F. Kennedy Middle School.

The two read poems as a duet, going back and forth with each line. Walton admitted that she was nervous at first but was happy with their performance by the time they read the final lines.

“My grandma said the more you read, the better your vocabulary gets,” she said.

Then there was Miko Marsh, who read a passage from a story she had written called “Heart of Crystal.” She enjoyed the warm applause from the audience, as well.

“It’s nice to see people get enjoyment from something you’ve written,” Marsh said.

For more information on the group, visit suffolkartleague.com.