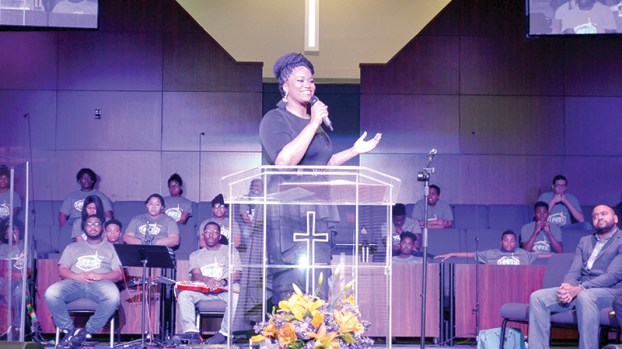 More than 200 people gathered under one roof on Monday to honor the life and legacy of the Rev. Dr. Martin Luther King Jr. with speeches, music, awards and a message to never give up.

The annual Suffolk City-Wide Dr. Martin Luther King Jr. Day Celebration was held for the first time at the new East End Baptist Church location on Portsmouth Boulevard. The event is put on by a committee and goes back for nearly 30 years, according to the Rev. David Wade, the committee chair.

Each year, the event makes a concerted effort to reach the city’s youth, Wade said.

“It’s to make sure that this generation today understands what Dr. Martin Luther King Jr. meant as far as the Civil Rights movement, of having equal rights and social justice,” he said. “Many people refer to him as the ‘drum major of justice,’ and different things like that.” 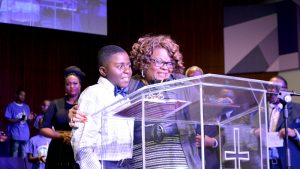 Costellar Ledbetter with the NAACP Suffolk Branch presents the award for first place in the essay contest to Joshua Parker, 13, at the annual city-wide celebration for the Rev. Dr. Martin Luther King Jr. held at East End Baptist Church on Monday.

The East End Baptist Church Youth Explosion Choir performed for an auditorium filled with the young and the old alike. City officials clapped their hands along with preachers. Worshippers and citizens, families and strangers, black and white sang to piano keys, guitar strings and drum clatter.

Minister and radio host of “Praise 104.9” TL Chisholm was the keynote speaker. She spoke about living, breathing and manifesting King’s dreams in today’s world.

“This man dedicated and devoted his life to serving the cause of civil rights,” Chisholm said. “To ensure equality and justice for all people. Standing behind a platform much like the one I’ve provided here today, he indeed fulfilled his God-divined calling, mission, purpose and assignment.

“Under the guidance of the Holy Spirit, he was able to reawaken hope in the black community, and orchestrate and lead a peaceful movement that would transcend and change the course of our nation.”

The I Have a Dream Award was presented to the Enlightened Minds Mentoring group, with Domenick Epps, Albert Hill and Roshawn Holland accepting the award. The volunteers teach children appropriate behavior, associations and focus while respecting authority figures.

Hill urged the audience to instill positivity into young people to counter negative influences and help them achieve greatness.

“We are here to make that change,” Hill said. “To give them hope where there is no hope, to give them vision when they have no sight, and to teach everyone they can be as great as they want to be if they believe in themselves and have self-accountability.”

The event’s community service award was presented to former Suffolk mayor Johnnie E. Mizelle, who described lessons that shaped him as a young boy.

“My mother always told me, and she emphasized it with force, ‘You’re no better than anybody else, but you’re just as good as anybody,’ and I have never forgotten that,” he said.

He praised colleagues who had helped him in his official duties, regardless of skin color.

“We didn’t see things in black and white,” he said. “We judged each person by the content of their own character.”

He recalled a young white woman who asked to help with the polls when he ran for City Council for the first time. She said her father had helped work the polls and she was excited to do the same, he remembered.

“That little lady was none other than the current mayor of the city of Suffolk, Linda Johnson,” he said. “She was showing her character, even then.”

Joshua read a quote from King’s historic “I Have a Dream” speech: “Even though we face the difficulties of today and tomorrow, I still have a dream.”

“We need to start believing that there’s a brighter day ahead,” Joshua said. “If you stop believing and stop having faith, your opponent has already won, because you have given up before you’ve even started.”