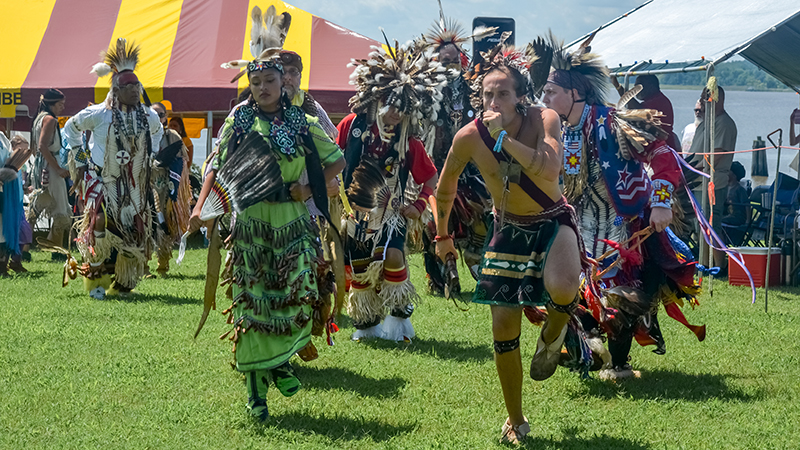 The Nansemond Indian Tribe is only one signature away from federal recognition. A scene from the tribe’s annual powwow in August 2017.

Leaders of the Nansemond Indian Tribe and five other Virginia tribes witnessed the recent passing of a bill in the U.S. Senate that pushed them further away from decades of injustice and closer to federal recognition.

“They’ve really been beating the bush on this one,” said Nansemond Indian Tribal Association Chief Ronald “Lee” Lockamy in a phone interview on Friday. “I’ve never seen these guys so excited. They looked like they were going to tap dance through the office.”

Federal recognition will allow these tribes to have legal standing with the U.S. government. It will allow tribal members to access educational scholarships, health care services, and other federal funding and social services. 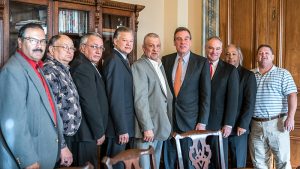 Chiefs of the six tribes affected, including Lee Lockamy of the Nansemond tribe, far right, meet with Sen. Tim Kaine, third from right, and Sen. Mark Warner, fourth from right, after the vote last week.

With federal recognition, these tribes will also be able to repatriate the artifacts and remains of their ancestors that reside in the Smithsonian.

“We can get them back on our tribal land to rebury them,” Lockamy said.

The senators reached across the aisle to other legislators who could have opposed the bill’s passing, Kaine said during a phone interview on Monday.

“Mark and I had to go one-on-one to different Republicans to persuade them and get this passed unanimously,” he said. “We were going to make a motion on the floor Thursday, and we got the last objection cleared at 10 a.m.”

The bill heads for the desk of President Donald Trump, who has yet to indicate his position on the legislation. Kaine, however, was confident that the bi-partisan support behind the bill will see it through.

“I feel that the administration knows about this bill and decided it was the right thing to do,” he said, adding that he feels good about an “eventual signature” within the next two weeks.

Former Rep. Jim Moran (D-Va.) first introduced a federal recognition bill in 2000 at the urging of Thomasina E. Jordan, the activist the bill is named after.

The 2017 bill was sponsored by Rep. Rob Wittman (R-Va.) and passed the House in 2017. The bi-partisan effort goes back years to progress in Congress by former Virginia Sens. Jim Webb, a Democrat, and George Allen, a Republican.

“We had Sen. Kaine and Sen. Warner arm-in-arm giving the thumbs-up sign when it was passed,” Lockamy said. “It was really incredible.”

The bill grants federal recognition to the Nansemond, Chickahominy, Eastern Chickahominy, Upper Mattaponi, Rappahannock and Monacan tribes, which have about 6,000 members combined, including many descendants of Pocahontas’ Virginia Powhatan tribe, according to a press release from Warner’s office.

The Nansemond tribe has about 300 members as of Friday, but more are expected to apply for membership following the bill’s passing, Lockamy said.

There are more than 550 federally recognized Indian tribes, and the first Virginia tribe to be recognized by the U.S. Bureau of Indian Affairs was the Pamunkey tribe in 2016. The six tribes recognized in the bill that passed last week had to fight discriminatory laws and other historical challenges.

One of those challenges was the Racial Integrity Act the Virginia legislature passed in 1924, which criminalized interracial marriage and required that every birth in the state be recorded by race as either “White” or “Colored.”

The law was supported by Walter Plecker, a physician, eugenicist and staunch white supremacist who ran Virginia’s Bureau of Vital Statistics for more than 30 years.

“He had this racist policy that there was no such thing as ‘Indian,’ and that made it difficult for classification,” Kaine said. “That left congressional recognition as the only way to get this done.”

The tribes also couldn’t fall back on formal treaties with the U.S. government to gain federal recognition, as each of them made peace with England before the U.S. was established.

Several of the chiefs traveled to England in the spring to commemorate Pocahontas. During their visit, a plaque was dedicated at the church where she is buried.

“When they go over to England, they get treated as visiting sovereigns,” Kaine said. “They treat them in an esteemed and honored fashion. They just want that same respect and dignity from this country that they loved and served.”

Lockamy said he grateful for the support of the senators and congressmen, along with the city of Suffolk and community partners. He said federal recognition will be used to further develop the tribe’s village and year-round cultural center, Mattanock Town.

“It’s a really historic event, and it’s going to change the lives of all the people in Virginia,” Lockamy said. “We’re going to be able to tell our story with the funds to do what we need to do.”